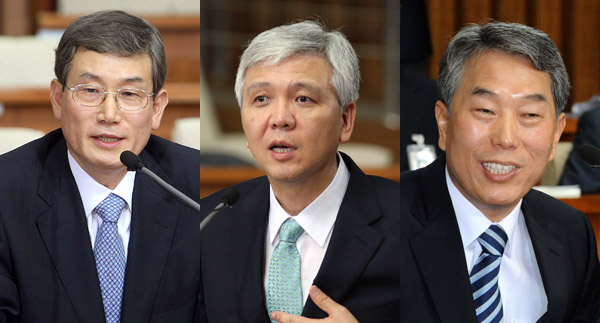 The legislature yesterday held a plenary session and voted in favor of the three nominees to the country’s top court. One vacancy still remains on the Supreme Court bench after the scandal-ridden fourth candidate, Kim Byung-hwa, gave up his nomination last month.

Of the 270 lawmakers who participated in the voting, Ko was approved by 226, while 39 opposed him and five abstained.

Kim Chang-suk was backed by 173, while 94 voted against him. Three lawmakers abstained.

Despite controversy surrounding his religious bias, Kim Shin was also approved by a 162-107 vote. One lawmaker abstained.

More than 150 of the 300 lawmakers were required to attend the session to vote on a motion. Of the participating lawmakers, a majority vote is required to pass the motion.

The three new justices will begin their terms after President Lee Myung-bak formally appoints them.

A new candidate will be nominated by the selection committee of the Supreme Court to fill the final vacancy.

After four Supreme Court justices retired on July 10, the court has been waiting for the National Assembly to approve the nominees to fill the empty seats on its bench. Ongoing political deadlock between the ruling and opposition parties, however, threw a wrench in the works for the top court.

With the three nominees confirmed, the delay in the Supreme Court trial processes is expected to be resolved quickly. When the court was in limbo, nearly 200 cases a week were delayed, and it was also impossible to hold a high-profile trial in front of the full 13-member panel.

Ko, 57, was the vice minister of the National Court Administration before being nominated to the Supreme Court bench. A native of Gwangju, he studied law at Seoul National University.

Kim Chang-suk, 56, was the president of the Supreme Court Library. He is a Korea University Law School graduate and his hometown is Boryeong, South Chungcheong.

Kim Shin, 55, is a native of Busan who studied law at Seoul National University. He was the chief justice of the Ulsan District Court.

During the confirmation process, he faced harsh criticism from the Democratic United Party and the Buddhist community for his alleged proselytizing attempts during his previous trials.