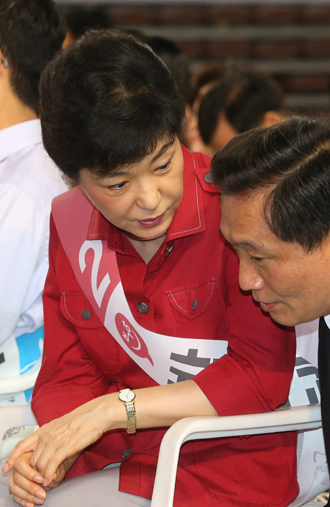 Park Geun-hye, left, former head of the Saenuri Party, listens to Lee Hag-jae, her chief of staff in Cheonan. [YONHAP]

A money-for-nomination scandal yesterday rocked the ruling Saenuri Party, putting a serious damper on the campaign of the conservatives’ presidential front-runner Park Geun-hye.

The National Election Commission said yesterday it has asked the prosecution to investigate Representative Hyun Young-hee of the Saenuri Party on charges of paying 300 million won ($265,018) to become a ruling party proportional candidate in the April 11 general election.

According to the election watchdog, she was suspected of paying the money in mid-March to then-Representative Hyun Ki-hwan, who was a member of the nomination committee.

The first-term lawmaker was also accused of paying another 20 million won to Hong Joon-pyo, former chairman of the party, in late March.

The petition was submitted to the Supreme Prosecutors’ Office on Monday, the election commission said, adding that it also asked the prosecutors to investigate the former lawmakers.

The scandal dealt a serious blow to the presidential campaign of Park, who led the party in the months leading up to the April general election as emergency chairwoman.

She carried out a series of reform projects to revamp the party’s image before the legislative election. Improving transparency in the nomination process was one of the key tasks.

In media interviews, Park once described the nomination reform of the party as “the last brush stroke on the eye of the dragon when you paint it.”

Former lawmaker Hyun, the accused bribe-taker, was a loyalist to Park. At the time, he served the nomination committee after declaring that he wouldn’t seek re-election in April.

He is currently the deputy head of the Yeouido Institute, the party’s think tank.

The alleged bribe-giver, Representative Hyun, was a scholar-turned-politician. She was elected twice to serve the Busan Metropolitan City Council, and was nominated as the 23rd candidate on the Saenuri Party’s proportional representation roster.

Through the April 11 general elections, 25 proportional representatives were elected on the Saenuri Party ticket. All the people named in the scandal denied the charges. Former lawmaker Hyun held a press conference yesterday and said he wanted to be questioned by the prosecution as soon as possible to clear his name and restore the party’s honor.

Former Saenuri Chairman Hong also denied the charge, saying he had nothing to do with the nomination process. Representative Hyun issued a statement yesterday to plead her innocence.

She said the National Election Commission learned about the allegation through her former campaign staffer, and he was getting back at her with the false accusation because she refused to appoint him as a lawmaker’s aide. The Saenuri Party was gripped with panic.

“They all said the charges were groundless. But since the National Election Commission asked the prosecution to open an investigation, we want this to be investigated fairly and thoroughly.”

After a party’s presidential primary stumping in Cheonan, South Chungcheong, Park told reporters that “It is a matter that the prosecution must investigate thoroughly to clear all doubts.”

The rival opposition Democratic United Party yesterday didn’t miss the opportunity to attack the Saenuri Party and Park. “This is the tip of the iceberg of Saenuri’s corruption,” said Representative Park Yong-jin, spokesman of the DUP. “This is a systemic problem of the Saenuri Party,” he said. “At the time, Park Geun-hye controlled the party and oversaw the nomination process and general election campaign, and it is clear that she must take responsibility.” The DUP spokesman also pressured her to renounce her presidential bid.

Meanwhile, the National Election Commission also asked the prosecution to investigate another money-for-nomination scandal in the Forward Unification Party, the predecessor of the conservative minority Liberty Forward Party. Two senior officials of the party were accused of having made a proposal to Kim Young-joo, a businessman-turned-politician, to pay 5 billion won in return for the proportional representation nomination, and Kim allegedly agreed.

Kim was elected a proportional representative of the FUP in the April general elections. Another official of the party was also accused of raising illegal campaign funds.

The election commission asked the prosecution to investigate the FUP on charges of failing to supervise its officials properly during the campaign.