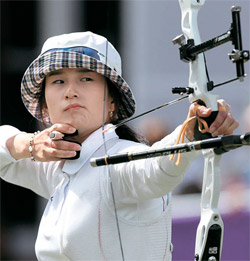 LONDON-- Ki Bo-bae won the gold in the women's individual archery Thursday at the London Olympics.

At Lord's Cricket Ground, Ki beat Aida Roman of Mexico in the final. Korea has now won seven of the past eight Olympic gold medals in the women's individual archery. Ki, who'd earlier won the team gold medal, also became the first double gold medalist for in Korea in London.

After the two ended the regulation all tied at the set score of 5-5, both archers shot an 8 in the one-arrow shoot-off. But Ki was declared the champion because her shot was closer to the center of the target.

In the individual competition, archers face off in a one-on-one knockout setting. Each shoots five sets of three arrows. A set win is worth two points and a tie is worth one point. And the first to garner six points wins.

If the archers are tied after five sets, they go to a one arrow shoot-off, in which the one with the higher score or, if still tied, the one whose arrow is closer to the bull's-eye is declared the winner.

After four sets, Ki held a 5-3 lead in the set score and needed only a draw in the fifth set to clinch the gold. Roman, going first, finished her set with three 9s for 27. After back-to-back 9s, Ki needed another nine for the decisive point but hit an 8 to concede the set and enter the shoot-off.

Ki, shooting first in the one-and-done event, hit another 8. But feeling the heat, Roman hit her 8 farther from the center.

It was tense from the beginning.

Ki said she was confident she could close out the match in regulation with her third straight 9, but she wasn't quite prepared for the sudden, swirling wind.

"It was disappointing, but I entered the shoot-off believing I would have another chance," Ki said, fighting back tears. "I never knew I was such a lucky kid."

She said hers were tears of joy, but she also felt bad about being the only medalist for Korea in the individual event. Choi Hyeon-ju lost in the round of 16 and Lee Sung-jin lost to Mariana Avitia of Mexico in the quarters.