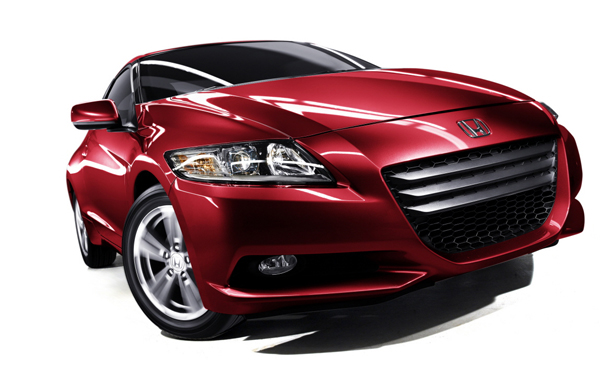 
First impressions go a long way, and Honda’s CR-Z sure cuts a dashing figure, borrowing design elements from the old CR-X and Insight and adding a meaty front grille to its raked windscreen, receding roof-line and truncated Kammback rear end that cuts drag 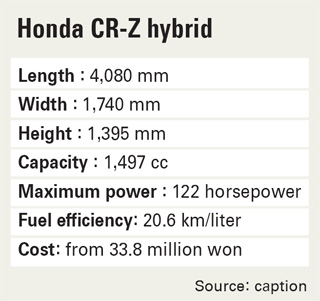 But while the world’s first “sport hybrid coupe” looks slick enough, it’s a little crunchier on the inside, and those go-fast pretensions can become alienating once you’ve peered through the looking-glass. The shark’s fin jutting from the car’s roof all but gives the game away ? kind of like sticking three-spoke hubcaps on your old Ford Fiesta.

Powered by a 1.5-liter, 4-cylinder engine and buttressed by a 10-kilowatt electric motor that adds up to 13 horsepower, the car comes bursting out of the gates with a combined 122 horsepower, but quickly gives up the ghost at mid-range rpm.

Having driven the automatic CVT (continuously variable transmission) rather than the six-speed manual, I also lost enough torque (123 pound-feet rather than 128) to make reversing up steep inclines as nerve-wracking as your average bungee jump.

Flicking to Sport mode helps a little, but not much. In fact, this is the first car where I ended up disengaging it altogether. The choppy gear changes it invokes hurl you around the cabin when the engine warms up, making full-blown acceleration feel like progressing from a Texan rodeo to the dinosaur Olympics. Just try flooring the throttle at 55 km/h and watch as nothing happens (at this range, all Sport seems to do is add engine noise).

However, most people don’t buy hybrids for their horsepower, they buy them to save money, and the shift paddles on the steering wheel help improve responsiveness when the power seems lost in transmission.

In a nice touch, the CR-Z’s insistence on economy and the need to monitor your speed is highlighted, literally, by a 3-D, electroluminescent central analog tachometer that encircles a huge digital speedometer. Part of this changes color according to which of three driving modes you select: blue for Normal, red for Sport and green for Econ (the latter tones down the air-con unit to save energy, while drawing more on the battery).

But while the speedo somehow works, the other graphics on the dash reminded me too much of my old Vodaphone - all energy bars and retro-digital chic, but hardly cutting-edge.

The start-stop system is practical and rarely annoying, while the steering tracks are tight enough to make darting around traffic fun. But too much body roll and back-end weight makes yanking the wheel a bad, and possibly calamitous, idea.

Some of the best and worst of the CR-Z come into play behind the front seats: a huge trunk (25.1 cubic feet) covered by a greenhouse-type hatch; or, when the divider is raised, two truly abysmal rear seats that would be more comfortable if made out of Lego. FYI, two-seaters should probably stick to being just that.

An attention-grabbing graphic equalizer represents more posturing and fails to compensate for a tinny-sounding stereo, while the USB and auxiliary cables protruding from a deep black hole look like the car stereo just got burgled.

There is no sun roof or CD player, the front seats are comfortable, but awkward to operate, and the GPS system, available only in Korean, seems to have its own idea of how long a kilometer is. The interior feels functional and no-frills. I never figured out why there are three drink holders.

Who will this appeal to? City slickers who like counting the kilometers and saving the planet from global warming, but who don’t wear these ambitions like badges of honor; penny pinchers who want something sexier than Honda’s Insight and Toyota’s Prius, and don’t mind it being slightly less economical.

Released in Korea last October, the CR-Z starts from 33.8 million won ($29,000), or 34.9 million with GPS. For a similar price, the Mini Cooper is more fun and nippier, while the Golf Cabriolet CDI offers a smoother ride and wins by not pretending to be something it isn’t. Hyundai’s Veloster is another potential rival, both cheaper and better looking.

Anti-lock disc brakes with brake-force distribution are standard, as is electronic stability control, automatic climate control, cruise control, and a tilting and telescoping steering column. Rear-parking assist makes this a beauty to slot into tight spaces.