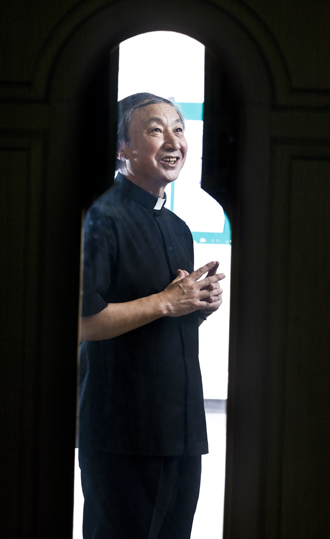 Father Huh Geun is a former alcoholic who recently published a thesis on how to effectively treat alcoholism. By Kwon Hyeok-jae

Father Huh Geun, 58, a priest and former alcoholic, has come full circle, earning a doctorate in social welfare from Seoul Christian University to better help those struggling with the addiction.

Soon after he was ordained in 1980, Father Huh started drinking during his three years as a chaplain in the Marine Corps.

At the start of his career, Father Huh was known as “a liberal priest, who loves to drink,” but as time passed he became a heavy drinker, skipping services and coming to blows with members of the church.

Realizing that he wouldn’t be able to overcome the addiction by himself, he entered a hospital in 1998. A year later, after recovering from his addiction, Father Huh became manager of the Catholic Alcoholism Pastoral Ministry Center and is now using his own experience to help others.

“Brain damage from alcohol can sometimes cause paralysis in both mind and body which often accompanies depression. Moderation and regarding alcoholism merely as a bad habit is never enough,” he says. “If you are in trouble, you must immediately abstain from alcohol with assistance from professionals.”

Father Huh has published a book titled “I Am an Alcoholic” about his addiction and recovery.

He pursued a doctorate in order to better serve Catholics battling alcoholism. “Leading the believers spiritually is one thing, and helping them realistically is another,” he says.

His doctoral thesis was titled “Research and Development of Short-Term Integrated Programs for Alcoholics’ Recovery and the Evaluation of Their Effectiveness.” It focuses on integrated therapy, asserting that five therapies, including action therapy and music therapy, must be done simultaneously in order to properly treat alcoholism.

“Integrated therapy has been conducted since the 1990s in foreign countries, but I am the first to try it domestically,” said Father Huh.

His assumption was that since addicts are damaged in so many ways, therapies should cover various fields as well.

Music therapy includes changing the lyrics of songs and singing them, whereas cognitive-behavioral therapies make alcoholics imagine their own actions in particular situations. His integrated program also contains spiritual and reality therapies.

Huh believes that harmoniously integrating these therapies could bring about more effective results compared to when each of them is treated separately.

The thesis was supported by extensive research by Father Huh, who divided 40 addicts into two groups and treated only one of the groups with integrated therapy for three months, yielding better results in that group.

Giving up drinking is a challenging task in Korean society, where get-togethers in companies are frequent and refusing a drink offered by a boss could be considered rude.

“That is one of the main issues when treating alcoholic patients,” says Father Huh. “I try to teach them that skipping such drinking occasions does less harm than attending them. People don’t even remember if you were there or not when they get drunk anyway.”