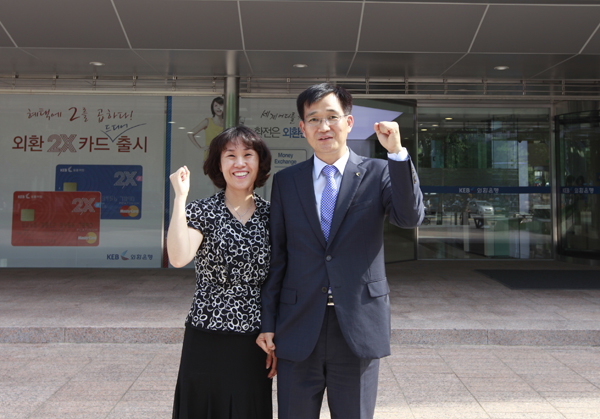 Choi Mun-hyoung and her husband, Kim Hak-don, celebrate their promotions to general manager positions after 22 years with Korea Exchange Bank in front of the bank’s headquarters in Euljiro, central Seoul, last Wednesday. Provided by the company

After 22 years together, Kim Hak-don and Choi Mun-hyoung of Korea Exchange Bank have proven the wisdom of that saying.

Kim and Choi have come a long way together since joining KEB in 1990. Now they will be in charge of KEB branches in two of Seoul’s affluent districts: Kim at Cheongdam Station and Choi at Daechi Station.

“My colleagues oftentimes told us we do all things together at once,” says Choi. “We started our careers here in the same year, and we gave birth to twin sons and we’re promoted on the same day.”

Kim and Choi were married in 1991, just a year after they met and began working at the bank’s Taepyeongno branch in 1990.

After their wedding, Kim, 50, worked in retail banking and the capital market segment, while Choi, 45, specialized in the private banking segment.

“I had seriously considered quitting after going through troubles with my boss and stressful moments, but my wife encouraged me,” Kim says. “It’s my wife who made me what I am today.”

Choi says Kim is more than just her better half: “He’s my best friend, my family and my colleague. Whenever I face hardships or setbacks, my husband gives me tremendous power as he considers my issues as his and gives me helpful advice from a colleague and family point of view. It’s a blessing to have someone at work on whom you can rely.”

The couple said they went through ups and downs while managing child- rearing and their careers.

During the Asian financial crisis in the late 1990s, it was common for one member of couples to quit, but Kim and Choi immersed themselves in work.

“I think we eventually got returns for our 20-year endeavor because we worked hard knowing that if either of us didn’t work hard enough, we’d both get blamed,” Choi said.

According to Kim, there are more benefits than disadvantages when a couple works in the same industry.

“My wife is an expert in the private banking segment, so she’s very good at managing customers,” he says. “I was in the capital market segment for five years, so I give tips to my wife on financial markets and products.”

But he acknowledges a downside: “When you are working for the same company, you can’t create a slush fund because everything naturally becomes transparent and you can’t hide your paycheck.”