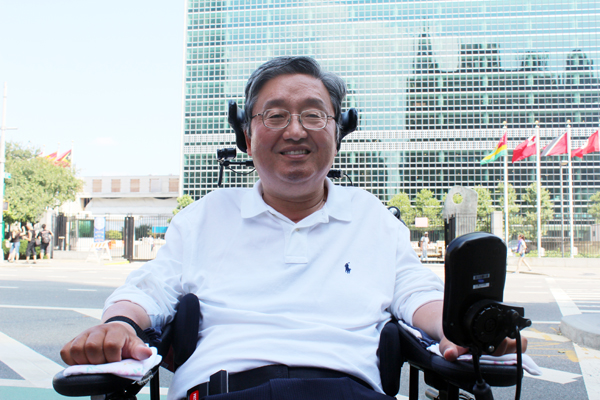 Lee Sang-mook, a 50-year-old professor at the School of Earth and Environmental Sciences at Seoul National University, visits United Nations headquarters in New York City on Monday. He is nearing the end of a 40-day journey from Los Angeles to Boston. [JoongAng Ilbo]


NEW YORK - Lee Sang-mook, a paralyzed professor of the School of Earth and Environmental Sciences at Seoul National University, has proved that disability need not be an obstacle to reaching one’s dream. In Lee’s case, that dream was to travel coast to coast across the United States.

In 2006, on a geographical survey with his students in the western United States, his car overturned. The accident killed a student and left him paralyzed from the neck down.

After receiving rehabilitation treatment at a special hospital in Los Angeles, he returned to the classroom in six months.

But the experience gave Lee the impetus to finally do what had been his dream for six years.

“When I faced death, I regretted the most for putting off what I thought was right and not instantly putting it in action.”

Q. Is the motif of your trip “Do it now or you may never get a chance?”

A. When I faced death, “later” meant nothing. There was an important conference last month, but I thought that if I didn’t travel across the United States now, I would never get a chance. I realized that there are more important things than a conference.

Did you go fishing with your friend, who is also paralyzed, in Montana?

I met a friend named Chris Clasby last year when he was hunting. I was shocked to see him hunting because his disability was more severe than mine. I decided to cross the country with his help. I wanted to get a hunting license, but it was too complicated. So we decided to go trout fishing.

Isn’t it difficult to cross the country as a disabled person?

To a disabled person, it is not so much whether something is difficult as whether it is possible. The question is the same as asking a mountain climber if it is difficult to climb Mount Everest. To prevent pressure sores, I have to lean backward every half an hour to an hour and let the blood circulate from my hip. Although it was difficult, the fact that I was able to travel was valuable.

What is your next challenge?

Since I became a geologist, I’ve been to many explorations. Before I begin a journey, I always believe that it will be my last one, but in the end, a new challenge awaits. Even this trip won’t be my last one. I stayed in hotels this time, but I want to camp out next time and explore geographical features. Part of my plan is to sail the Indian Ocean. I am just afraid that the two helpers will quit when I tell them my future plan.

You rode in a vehicle specially modified for disabled people?

Although Korea is one of the biggest car manufacturing countries, it doesn’t have a vehicle that disabled people can ride in. I plan on taking the Japanese car I used to Korea. Maybe that will encourage Korean companies to make such vehicles.