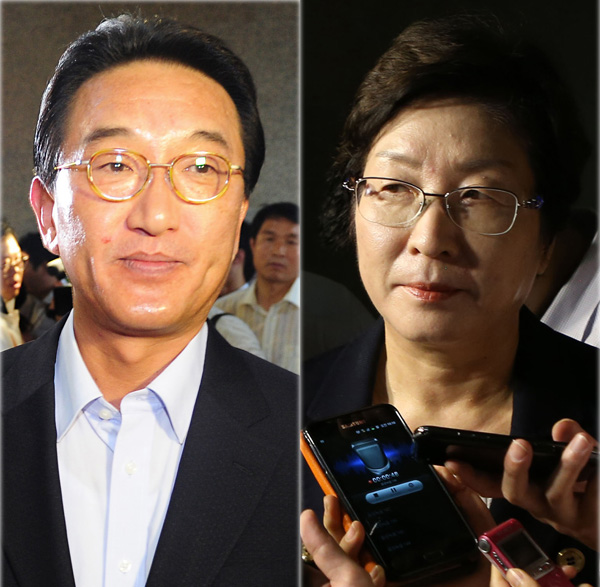 
One day after the National Election Commission requested an investigation into a money-for-nomination scandal within the ruling Saenuri Party, Hyun Ki-hwan, the accused former member of the party’s nomination committee, voluntarily appeared before prosecutors for questioning.

“I came here to find out what has happened to me,” Hyun told reporters before entering the Busan District Prosecutors’ Office yesterday afternoon. “I have never received money related to nominations. I’ve been greatly defamed.”

Hyun is accused of having received 300 million won ($265,000) from Representative Hyun Young-hee of the Saenuri Party in mid-March in return for her nomination as a proportional candidate in the April 11 general election.

The allegation has rocked the presidential campaign of frontrunner Park Geun-hye, who led the party in the months leading up to the general election as emergency chairwoman. Former lawmaker Hyun, who is currently the deputy head of the Yeouido Institute, the party’s think tank, is a Park loyalist.

Supreme council members of the ruling party have requested that both Hyuns break away from the party in order to create an environment where the prosecution can “undergo its investigation more thoroughly and quickly.”

The former lawmaker’s voluntary appearance before prosecutors is seen as a move to prevent the scandal from hurting the Saenuri Party ahead of the presidential elections in December. Prosecutors, however, expressed discontent with the move, saying it is too early to question Hyun because preliminary investigations haven’t been completed.

Earlier on in the day, former lawmaker Hyun said that he will “prove that the speculation is all wrong by checking their phone records and schedules.”

Representative Hyun Young-hee, the alleged bribe-giver, also arrived in Busan yesterday to prepare for the prosecutors’ questioning. She has also dismissed the allegation as “groundless.” Hyun previously pledged to appear before prosecutors for questioning even during a session of the National Assembly, although she is immune from arrest while the legislature is in session.

“It’s ridiculous,” she said before attending a supreme council members’ meeting of the ruling party to answer questions. “I don’t know why I’m called in to attend this meeting.”

Prosecutors said that they will call in Hyun Young-hee’s former secretary, a 37-year-old surnamed Jung, for questioning early next week. Jung is known to have given lawmaker Hyun’s phone records and schedule documents to the National Election Commission along with a notebook containing details of the bribery.

The prosecution plans on officially summoning the two accused Hyuns after they are done scanning through related documents received by the National Election Commission.

The ruling party has urged prosecutors to conduct a thorough investigation and called in the two accused party members to explain the allegations.

“In the meeting, the two argued that they have not met face to face with Jung,” said Kim Young-woo, the party’s spokesman.

The main opposition Democratic United Party continued to attack the ruling party and presidential hopeful Park over the latest bribery scandal, saying that Park “should withdraw her presidential bid if scandal turns out to be true.”