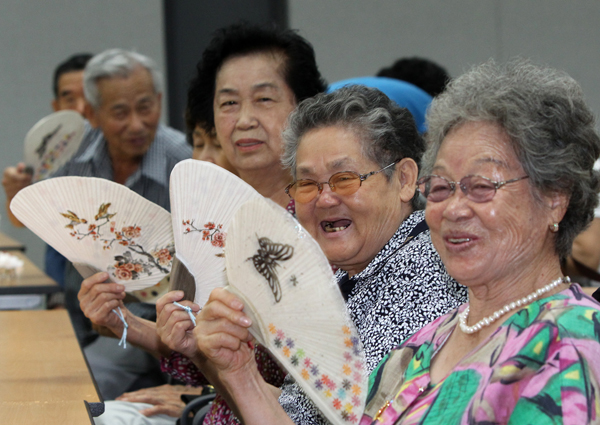 Senior citizens at the Suji Health Center in Yongin, Gyeonggi, step out from the sun and keep cool with fans they made themselves yesterday as the debilitating heat wave continues. They also received tips on how to combat the heat. [YONHAP]


Last Friday, a 79-year-old woman in South Jeolla passed away from exhaustion while farming rice, and a 68-year-old homeless man was found dead in front of Busan Station on Monday, both victims of heat exposure.

So far, eight lives have been lost for heat-related reasons, six of which were seniors over the age of 60.

Because the elderly are the most vulnerable to the heat, the Ministry of Health and Welfare announced measures to help protect senior citizens yesterday which will be implemented until the end of the month.

Targeting 150,000 seniors who live alone, the ministry said that some 5,500 elderly caretakers will visit door-to-door to check on their condition.

They will especially pay attention to those with cardiovascular problems.

The caretakers will also provide information and the whereabouts of community centers these single seniors can visit to escape the sweltering heat, especially those without air conditioning.

On days when there is a heat-wave advisory notice, towns and villages will make announcements requesting farmers refrain from working in the fields during the hottest hours of the day, between 1 p.m. and 5 p.m.

According to the Korea Centers for Disease Control and Prevention, in the months of June and July, a quarter of the 410 patients suffering from sunstroke and other heat-related symptoms were over the age of 60.

The ministry last month also provided 5,000 low-income senior citizens with fans and bamboo mats to sleep on, and yesterday with the support of civic organizations and financial groups, the government provided mats to 4,000 more low-income seniors.

“The heat wave is forecast to continue for the time being, and it is worrisome that the number of deaths as of [Tuesday] from the heat wave already surpassed that of last year,” Sohn Gunn-yik, vice welfare minister, stated yesterday,