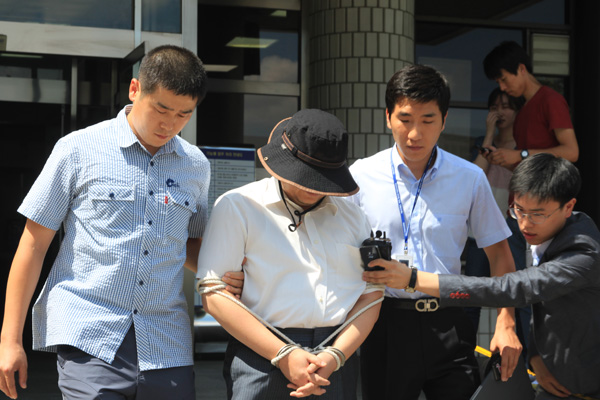 A 45-year-old obstetrician surnamed Kim, charged with abandoning the corpse of a 30-year-old woman who died after he allegedly injected her with a drug, leaves the Seocho Police Station in southern Seoul yesterday. By Yang Jin-ho


The mysterious death of a 30-year-old woman and the Gangnam-based obstetrician who allegedly abandoned her corpse in a riverside parking lot began to unravel as police confirmed yesterday that the two had an ongoing sexual relationship.

On Thursday, the Seocho Police Precinct filed an arrest warrant for the 45-year-old doctor surnamed Kim on charges of abandoning a patient’s corpse in her white Audi car in the parking lot of Jamwon Hangang Park, southern Seoul, early Tuesday morning.

Kim turned himself in several hours after the body was spotted by a passerby and told police, through his attorney, “There was no affair with the woman and following a request by the patient, I prescribed sleep-inducing drugs.”

The patient surnamed Lee, an employee at an adult entertainment establishment, first met Kim a year ago when he performed a procedure on her, and according to Kim yesterday, they met every three or four months.

According to the initial police report, Kim met Lee at his clinic in Gangnam District alone and administered a 5-milligram dose of Midazolam, a drug used for easing moderate to severe insomnia, late Monday. The amount isn’t considered lethal. Midazolam is sometimes used as a date-rape drug.

But yesterday, Kim confessed to police that he sent Lee a text message at 10 p.m. Monday in an inebriated state, asking, “Do you want to be injected with nutritional supplements?”

When she showed up at the clinic, she was administered the Midazolam, he said, which appears to have been used as some kind of sexual aid, said police. Kim told police that after he injected Lee with the drug they had “physical contact,” contradicting his initial testimony. He also admitted that Lee became unconscious 15 minutes after the drug was injected.

Police said CCTV footage shows Lee walking into a consulting room in Kim’s Gangnam clinic at 1:30 a.m. Tuesday with Kim following. Forty minutes later, he comes out of the room with a masked Lee in a wheelchair and leaves the building.

According to the police, Kim testified that he contacted Lee every three or four months, injected her with nutritional supplements and engaged in sex. The Seocho Police also booked Kim’s 40-year-old wife, surnamed Seo, yesterday to investigate her on charges of assisting her husband and not reporting the dumping of Lee’s body. Police said Kim drove Lee’s Audi from the clinic to Hangang Park at 5 a.m. on Tuesday with Lee’s body beside him in the passenger seat. Seo followed in her husband’s car. She picked him up in the parking lot and drove away.

According to the police yesterday, Seo said in questioning that she received a call from her husband saying that he had killed a patient by mistake and “needed help.” She said, “I did not know my husband and Lee had any improper relationship.”

Police said Kim injected Lee with a drug without a prescription and will be charged with violating medical laws. The police summoned two nurses from the clinic for giving Kim the drug without a prescription and forging medical accounts. Lee suffered from insomnia because of ongoing depression, family members said, and was taking sleeping pills. Four days before she died, Lee left a post on her blog reflecting a mixed outlook on life. It was her first blog post since 2010.

“I thought life was nauseating but in that nausea there is laughter,” she wrote. “Even if my heart becomes bankrupt, I will laugh.”