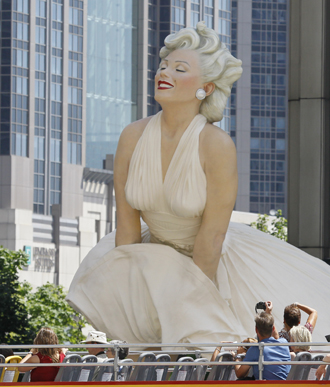 Seward Johnson’s 26-foot-tall sculpture of Marilyn Monroe, in her most famous wind-blown pose, on Michigan Avenue in Chicago [AP/YONHAP]

LOS ANGELES - There is the well-honed Marilyn Monroe screen persona - the breathy, girlish voice, the glamorous curves and the flirty sex appeal - and then there are the films that allowed her to stretch, or at least allowed her to try.

A devout Method actress, Monroe took her craft seriously, dug deep in search of motivation and worked harder than her effortless screen presence would suggest. For a while, that is, until her demons took over.

On the 50th anniversary of her death, here’s a look at five of her most memorable film performances, the ones that stand out over her prolific but sadly short career:

“Some Like It Hot’’ (1959): This was the first title that came to mind when pondering this list. Maybe because it’s the best film she was ever in - the Billy Wilder classic is listed as the greatest comedy ever by the American Film Institute - but also because the role of Sugar Kane Kowalczyk is just so quintessentially “her.’’ Monroe is totally magnetic, with innocence and sexuality in equal measure. As lead singer of an all-girl orchestra, she gets to sing, dance, play the ukulele and show off her comic timing. Monroe finds a tricky balance between her otherworldly looks and a down-to- earth charm, and plays beautifully off Jack Lemmon and Tony Curtis.

“Gentlemen Prefer Blondes’’ (1953): Describing her performance as gold-digging Lorelei Lee as iconic would not be hyperbole. Her rendition of “Diamonds Are a Girl’s Best Friend’’ remains so enduring, it inspired Madonna’s “Material Girl’’ video, down to the blonde waves, candy-colored pink dress, admiring backup dancers and tightly structured choreography. Monroe actually gets second billing behind Jane Russell in Howard Hawks’ musical comedy based on the Broadway show about a couple of showgirls and best friends who travel to Paris, run into misadventures and revel in all the attention thrown their way.

“The Seven Year Itch’’ (1955): Here’s Monroe again at the center of one of film’s most famous images: standing over a New York City subway grate, letting the wind from a passing train send her ivory, pleated halter dress billowing all around her. (The dress itself sold at auction last year for $5.6 million, including commission.) But the whole performance is a great example of her screen presence in a nutshell: naive, sweet, beguiling and irresistible. She’s such an idealized incarnation of classic female allure, she’s known only as “The Girl.” Working for the first time with Wilder (who famously had difficulty with her), based on the George Axelrod play, Monroe plays the sexy upstairs neighbor who bewitches Tom Ewell’s character while his family is away for the summer.

“Bus Stop’’ (1956): A rare opportunity for Monroe to show some dramatic ability. But really, everything she can do is on display here: Joshua Logan’s film, based on the William Inge play, offers the full range of Monroe’s abilities. She stars as Cherie - that’s pronounced “Sher-EE,’’ not “Cherry” - a lousy saloon singer toiling away in Phoenix until she can find a way to get to Hollywood. Yes, her Arkansas accent grates, and if we’re being honest, the way overzealous cowboy Don Murray carries her off and forces her into an engagement would merit a restraining order now. But Monroe also gets some quieter moments that reveal her vulnerability.

“The Misfits’’ (1961): A poignant pop culture time capsule: This is not just Monroe’s final film but Clark Gable’s, too. Co-star Montgomery Clift would be dead a few years later. Monroe’s then-husband, playwright Arthur Miller, wrote the script for her to give her a meatier role. But by all accounts, alcohol and pills made her an absolute mess and she was frequently late to John Huston’s set. Given that her newly divorced character is drunk most of the time, along with the lost souls with whom she seeks solace in the Nevada desert, it’s hard to tell where the performance ends and real life begins. In an eerily ironic quote from Eli Wallach as he’s toasting Monroe’s character for her vitality, he says: “Here’s to your life, Roslyn. I hope it goes on forever.’’ AP