From bodybuilding champ to the brig

From bodybuilding champ to the brig 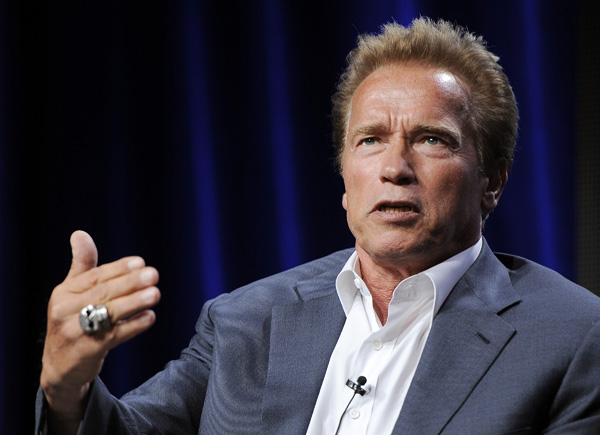 BEVERLY HILLS, Calif. - Arnold Schwarzenegger was so eager to start his bodybuilding career that he briefly ended up in an Austrian military brig, the actor and former California governor said Friday.

He was 18 and serving a mandated year with the Army in his native Austria in the mid-1960s when he snuck out of camp for the Junior Mr. Europe contest in Germany, Schwarzenegger told a meeting of TV critics.

He won the contest, but also earned two or three days in the Army jail, Schwarzenegger said. But military officials felt “uncomfortable” and he was released, he said.

Schwarzenegger, 65, is the subject of a new ESPN Films documentary, “Arnold’s Blueprint,” set to debut Sept. 26 on the ESPN Web site Grantland.com. It’s one of a series of short documentaries that will be available online.

His Army superiors ended up supporting his bodybuilding efforts, he said: They created a makeshift gym for him and helped him get the food he needed to pack on 25 pounds of muscle in a year.

Schwarzenegger, who went on to parlay titles including Mr. Olympia and Mr. Universe into a Hollywood career, said his drive to be an athlete helped him during his seven-year tenure as governor that ended last year.

When he began pursuing bodybuilding as a youth, he recalled, his parents dismissed his activities as self-indulgent and suspect.

But “I had a very clear vision of where I wanted to go,” Schwarzenegger said, including America and movie stardom.

When he encountered resistance to his political goals, he had the ability to ignore cries of “no, no, no, it’s impossible,” he said. “I never saw a ‘no’ as a ‘no.’ I always heard ‘yes,’ ” he said, speaking to the Television Critics Association at the final session of the group’s summer meeting.

Schwarzenegger, who has resumed his acting career, is starring with Sylvester Stallone and Bruce Willis in the newly released “The Expendables 2.”