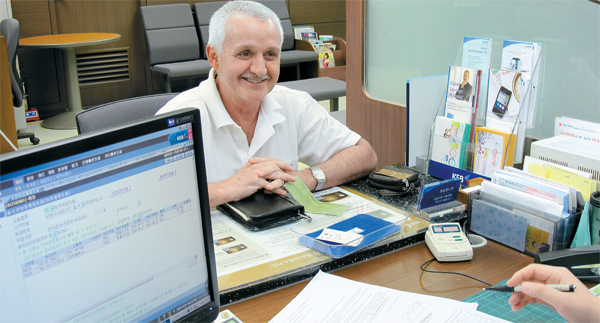 A foreign customer gets a consultation at a Korea Exchange Bank branch. As the number of foreigners living in Korea has reached 1.4 million, banks have been stepping up services for them. Provided by the company


Last month, Korea Exchange Bank hired five foreigners who are naturalized Korean citizens. To its surprise, the bank received nearly 40 applications from people born all over the map: China, Nepal, Vietnam, the Philippines and Indonesia.

It was a happy surprise, for the bank wanted to hire them to improve its services for customers living in Korea who were born abroad.

As the number of foreigners living here has grown significantly in recent years, reaching nearly 1.4 million last year, up more than 10 percent compared to 2010, Korean banks are hoping to tap the growing potential customer base.

This year banks have been stepping up the number of ATMs that work in foreign languages, for example.

“From the 1960s through the 1980s, when Korean workers went abroad to contribute to their country’s growth, one of the biggest challenges they faced was wiring their earnings back home due to language and cultural difference,” said a KEB official. “Since we remember how that felt, we want foreigners working hard in a strange environment to feel comfortable using our bank when transferring their earnings back home.”

The new recruits will take part in marketing and planning for foreign customers and sell KEB’s financial products. The bank limited its applicants to those with a college degree or higher.

Among local banks, KEB leads in the realm of foreign customers. It’s estimated to have 30 percent of the foreigners living in Korea as its customers.

According to the Ministry of Justice, which handles immigration, roughly 43 percent of foreigners, or more than 590,000, are here on work visas. The second-largest group of expatriates are people married to Koreans, which account for 10.4 percent of the total.

Chinese are the largest group followed by Americans, Vietnamese and Japanese.

Other banks have also hired foreign employees to get more foreign customers.

Since last month, NH Nonghyup Bank has been in the process of hiring six foreign employees. The applicants are foreigners married to Koreans who can speak Korean fluently. Three will be stationed at branches in Gyeonggi and three in branches in South Gyeongsang.

In April, the Industrial Bank of Korea (IBK) hired 12 foreigners from Vietnam, China and the Philippines who are married to Koreans. The employees are working at the bank’s branches in Daegu, Incheon and Cheonan, South Chungcheong.

Other banks are enhancing their foreign language services and marketing strategies.

“We are strengthening our global services and [foreign] customers are now able to conveniently use our ATM services,” a Citibank official said.

The bank said since April it has changed the programs on its ATM machines in 220 branches across the country to offer services in foreign languages. Additionally, it has a special foreign services teams operating in 12 branches. Even its mobile banking system is offered in English.

Shinhan Bank recently added Mongolian and Russian on its ATM machines. Previously there were six languages, including English, Japanese and Chinese.

In the case of Woori, Shinhan and KB Kookmin banks, some branches in areas with many foreigners operate on the weekends. Woori’s branches in Daehangno and Gwanghee-dong in Seoul as well as its branch in Uijeongbu, Gyeonggi, are open on the weekend. In Ansan, Gyeonggi, Shinhan and KB Kookmin banks have branches that are open on weekends. Foreign workers employed in factories have difficulty getting to banks on weekdays.

Card companies have also been jumping on the bandwagon. KB Kookmin Card recently launched a Be Twin check card, which was jointly created with Industrial & Commercial Bank of China (ICBC). The main target is Chinese living in Korea. Those who have the card can access accounts in ICBC without having to open a separate account at KB Kookmin Bank. The card also provides various discount services, including movie tickets, restaurant bills, amusement park tickets and airfare.

“Foreign customers are a blue ocean market for local banks, especially since the market for Koreans has been saturated,” said an official at Standard Chartered Korea.