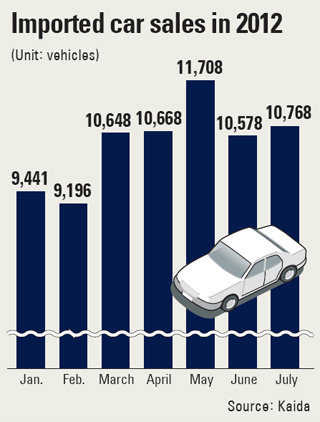 Sales of imported cars in Korea last month marked a 21.5 percent increase compared to a year earlier, thanks to steady sales of popular models and aggressive sales promotions.

A total of 10,768 foreign-made vehicles were sold last month, about 1,900 vehicles more than last July. The figure is also 1.8 percent more than sales in June, when Korean drivers bought 10,578 vehicles, according to the monthly report released by the Korea Automobile Importers and Distributors Association (Kaida) on Friday.

“Since the deliveries of long-awaited models in some brands were solved and with good sales promotion campaigns, the July sales saw an increase compared to last month,” said Yoon Dae-sung, executive managing director of Kaida.

Imported car sales have been growing steadily despite a sluggish economy.

Since March, the monthly registration of imported cars surpassed 10,000 vehicles. The cumulative sales figure from January to July is now 73,007 vehicles, up 20.6 percent on-year from 60,523 vehicles.

BMW was the only one that saw monthly sales jumping 12.6 percent compared to June, whereas Benz, Audi, and Volkswagen’s monthly sales decreased by 3.9 percent, 10.6 percent, and 5.8 percent, respectively.

The Mercedes-Benz E300 was the best-selling foreign car in July with 515 units sold, while the Toyota Camry was the runner-up with 439 and the BMW 528 was third with 393.

Among foreign cars sold in July, 49.1 percent were vehicles with engine displacements below 2,000 cubic centimeters, and sales of diesel-fueled and hybrid vehicles accounted for 52.1 percent of the July car sales, indicating that high gasoline prices influenced consumer’s selections.

Foreign car brands are looking to expand their sales with fresh models in the second half.

BMW already released new models of its 6-series Gran Coupe, 525d Touring, M5 and X6M, while Benz is expecting to introduce the new SL 63 AMG and C-class Coupe in upcoming months. Volkswagen releases a new Passat late this month, while Nissan introduces the Altima in September for the midsized vehicle segment. Toyota, the fifth-best foreign car in Korea, will release Venza, a sports utility vehicle, in upcoming months.