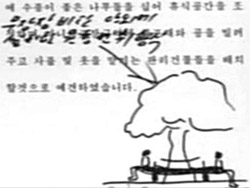 The Swiss-educated leader of North Korea, Kim Jong-un, believed to be in his late 20s, is showing an interest in golf, giving the order to construct mini-golf courses at a newly built amusement park.

The North’s state media reported that when Kim visited the Rungna People’s Pleasure Ground on July 25 with his wife Ri Sol-ju, he “looked around for places to build mini-golf courses.”

In a documentary film that aired on Monday, a document appeared titled “Report on the Procedure of Building Mini-Golf Equipment.”

In the report, Kim wrote on March 29 that the landscapers for the Rungna amusement park should “plant trees between each golf facility for providing shade.”

There, he himself drew pictures of people taking a break in the shade of a big tree and made a specific explanation next to it.

He also stressed in the report to create a golf-ball rental service and arrange for places to dry wet golf equipment and clothing.

Still, he wrote “golf equipment,” not “golf course,” which suggests that he won’t build a large-size golf course but a miniature.

“He appears to be enjoying golf,” the official said.

“Kim is showing his own style by himself, regardless of whether it’s western or capitalist,” Lee Wu-yeong, a professor at the University of North Korean Studies, said.

“It’s seemingly because of his experience of studying abroad, first, but he also appears to intend to give messages to the outside world that he is open-minded.”

His late father, Kim Jong-il, reportedly had different tastes when it came to golf.

There, a high-ranking official told him that “golf is a sport popular among gentlemen in capitalist countries.”