Celebrations and farewells on day 10

Celebrations and farewells on day 10 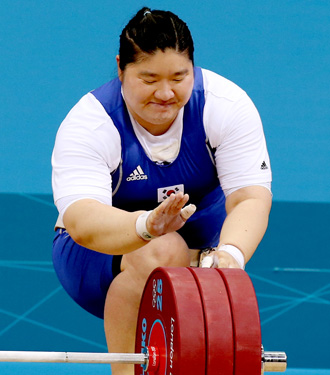 Day 10 of the London Olympics was an especially moving one for Team Korea. The country met its gold-medal target with pistol shooter Jin Jong-oh’s second gold of the Games, bringing the total to 10 with one week left.

But on the same day, weight lifter Jang Mi-ran reminded the nation that the Olympics are not just about the medal standings.

The defending champion battling a series of injuries at her third Summer Games finished fourth in the over-75-kilogram event, likely the last of her Olympic career. After her lift, Jang kneeled down and prayed before kissing the barbell and bowing before the crowd.

Jang, 28, ruled the weight lifting world in the late 2000s, taking four world championships with gold and silver medals at the Olympics. But since the Beijing Games, she has suffered from shoulder and back injuries. A car accident also prevented her from training.

It was clear from the start that young weight lifters Zhou Lulu of China and Tatiana Kashirina of Russia were going to be competing for gold in the heaviest weight lifting class this time around.

“I am just thankful that I’ve finished the competition without getting injured,” a tearful Jang said at the ExCeL Arena after the event. “I am worried that I have let down people who supported me and have showed me affection since my total wasn’t like what I did in Beijing.” 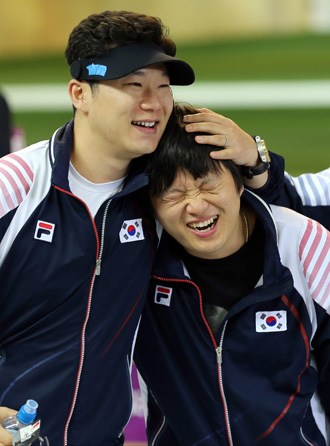 Jin Jong-oh, left, celebrates his gold medal with silver medalist Choi Young-rae after finishing their 50-meter pistol shooting event at the 2012 Olympics in London on Sunday. Jin beat Choi by 0.5 points and claimed his second gold of the Games.

While Jang’s performance wasn’t a repeat of 2008, Team Korea has overcome a rocky beginning to stand in fourth place in the gold medal count and is close to the Beijing total. The strong outing has a lot to do with Jin’s dominance in the men’s pistol shooting events.

Jin, who delivered Korea’s first gold medal in the men’s 10-meter air pistol shooting on July 28, beat teammate Choi Young-rae in the 50-meter event by 0.5 points to win his second.

He became the first local shooter to take home two gold medals at an Olympics and is also the first Korean athlete in an individual sport to defend a title after winning the 50-meter in Beijing.

In other events on Sunday, Choi Gyu-jin, a Greco-Roman wrestler, finished fourth after losing to Mingiyan Semenov of Russia in the men’s 55-kilogram bronze medal contest.