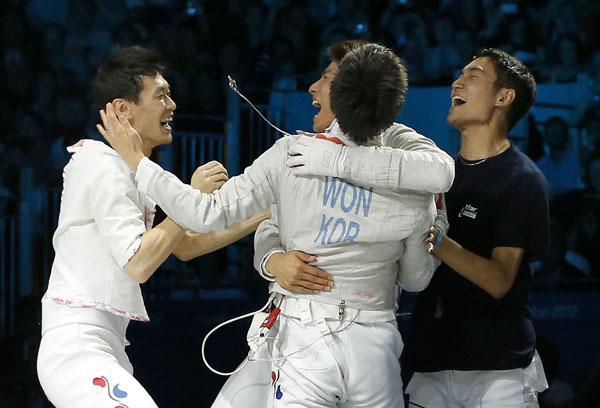 Korean men celebrate after winning the gold medal in sabre fencing against Romania on Saturday. [YONHAP]

A controversial judging decision that cost fencer Shin A-lam a chance at an individual medal shed some light on Korea as a loser in the world of sports diplomacy.

In the competition itself, however, Korea emerged as a big winner.

The four-member women’s fencing team - including Shin - won the silver medal in epee early yesterday morning Korea Standard Time, extending the country’s medal collection in the sport at the London Olympics to two golds, one silver and three bronzes.

It was Korea’s best Olympic performance in fencing, easily surpassing the tally of a gold and bronze medals at the 2000 Sydney Games.

It also positions Korea as the second-best, after Italy, of the 10 countries who competed in fencing. Italy, a fencing powerhouse, also won six medals as of yesterday, including two golds, two silvers and two bronzes.

Fencing medals account for a third of Korea’s total of 18 as of yesterday.

The team’s performance surprised many, who were hoping for one gold medal in London. And those expectations sank after Nam Hyun-hee, ranked No. 2 in the world, finished fourth in the women’s individual foil event July 29.

The next day Kim Ji-yeon won a gold medal in the women’s sabre, the first fencing gold medal for a Korean woman and Korea’s first in a sabre event. Jung Jin-sun added another bronze in men’s epee the same day.

Shin’s resentment might have affected her teammates, many of whom said they wanted to avenge her loss by winning. Shin lost to Germany’s Britta Heidemann at the semifinals Tuesday and finished fourth.

But some observers of the sport said Korea’s success should not come as a surprise, given systematic improvements in training and increased investment in recent years.

Prior to 2009, corporate sponsorship of the national fencing squad was about 350 million won ($308,778) per year. When Son Kil-seung, former chairman of SK Group, took the helm of the Korean Fencing Federation in 2009, sponsorship skyrocket to 2 billion won annually.

The money has been used for more overseas training and competition at international events. The investment paid off earlier this year, when Korea won nine gold medals at the Asian Fencing Championships, surpassing China. Coach Shim Jae-sung said that only four or five years ago, Korea could be expected to win no more than four gold medals.

The youth of this year’s medal winners increases expectations for more medals at the 2016 Rio de Janeiro Olympics.

Coach Shim said the performance in London is not a “surprise,” and Korea is on track to realize its goal.