Council aims to spread the word on Korean culture

Council aims to spread the word on Korean culture 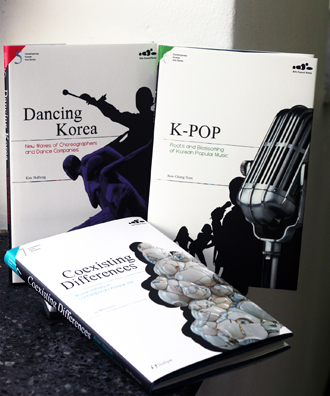 Three new books published by the Arts Council of Korea are part of a goal to release 15 titles by 2015. Provided by the council

If you think the global popularity of K-pop is only a recent phenomenon, you might want to think again.

So says Kim Chang Nam, professor of media and communications at Sungkonghoe University, in his new book, “K-Pop: Roots and Blossoming of Korean Popular Music.”

In the book, Kim says that the emergence of K-pop in the global scene is not abrupt and that its roots can be found in the decades-old history of Korean popular music. He outlines the developments of Korean pop music from Japanese colonization (1910-45) to the 1990s, which laid the groundwork for today’s worldwide spread of K-pop.

Kim’s new book is one of the three titles that the Arts Council of Korea released last month in an attempt to introduce contemporary Korean arts overseas.

The other titles are “Dancing Korea: New Waves of Choreographers and Dance Companies,” by Kim Malborg, and “Coexisting Differences: Women Artists in Contemporary Korean Art,” by Jin Whui-yeon.

Malborg is president of the Dance Research Institution at Ewha Womans University, and her work is a useful source on the history of contemporary Korean dance as well as major Korean choreographers and dance companies.

The organization’s goal is to publish three or four titles each year and a total of 15 by 2015.