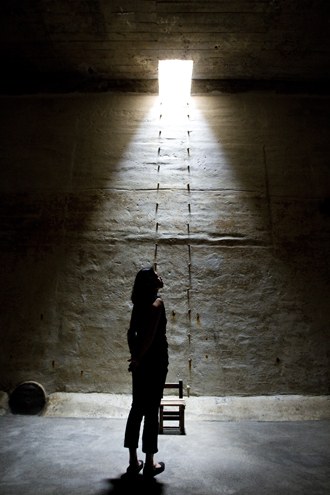 Architect Lee So-jin is seen in the so-called “closed well” space in the Yun Dong-ju Literature House. By Kwon Hyuk-jae

Yun Dong-ju, a renowned Korean poet who was most prolific during the Japanese colonization (1910-1945), was well-known for a writing style at once both lyrical and defiant, evoking a nostalgia for times of peace as well as independence.

In a 1986 survey, Yun was selected as “most popular poet among youths” and he remains one of Korea’s most popular and beloved poets.

Many of Yun’s poems approach the lives of ordinary people from a sensuous perspective. And they contain - in addition to self-reflection - substantial consideration and affection for individual human beings and the world at large.

After dinner, the two would walk on Inwang Mountain, and it was during this time that some of Yun’s major works were born, such as “The Night I Count the Stars” and “Self-portrait.”

Located near the hills on the trail toward Inwang Mountain, Cheonun-dong, Jongno District, central Seoul, the Yun Dong-ju Literature House opened its doors on July 25. The neighborhood is west of Gyeongbok Palace and near the Jongno District Community Health Center.

Last year, the district office decided to turn a pressurization facility into a house of literature dedicated to Yun. Lee So-jin, director of the architecture foundation Atelier Lion Seoul and winner of this year’s “Young Architect” award, was chosen to design the house.

At first glance, the building seems to be an ordinary-looking white box. When Lee began the remodeling project, she chose to do it in a way that was compatible with the surrounding neighborhood and leave the exterior of the building largely unchanged. But she did install a large window that provides an expansive view of Cheongun-dong and downtown Seoul.

After entering the house, visitors can view some of the memorabilia of Yun’s short life, including his Myeongdong Elementary School graduation picture and several handwritten notes.

A life of 28 years can yield a modest number of items, and these were secured with the help of Yun’s nephew, Yun In-seok, who is a professor of architecture at Sungkyunkwan University.

A door at the end of the exhibition center leads to a garden. Named “open well,” this area holds a water tank that construction workers found during the remodeling. The garden was created when they removed the top of the tank.

When the sun sets, the glittering stars recall Yun’s poem “The Night I Count the Stars,” which reads: “To a star memory, To a star love.” It is not difficult to imagine Yun being inspired by the Seoul night sky.

Through the iron gates beside the garden, visitors come across a dark room. Dubbed “closed well,” this area also used to have a water tank, and visitors can still feel the humidity and smell the dampness.

This room was built in order to represent the despair and sorrow Yun would have felt when he was imprisoned in Fukuoka on charges of violating the peace preservation law after going to Japan to study in 1942.

“I hope that in this space visitors will contemplate that state of emotion Yun was in and take a moment of silence,” said Lee.