What is economic democracy anyway?

What is economic democracy anyway? 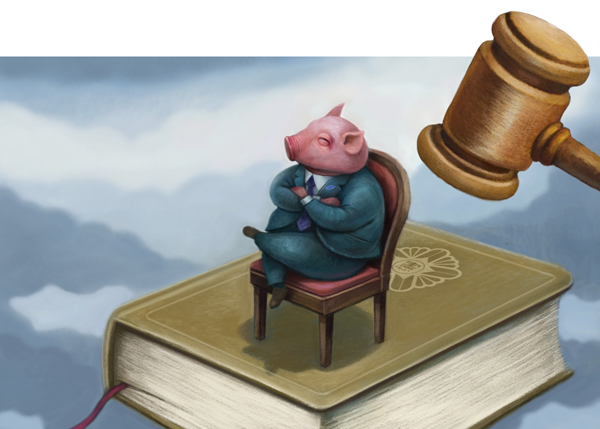 Ahead of the presidential election in December, Korean politicians, business figures and scholars are engaged in a sloppy war of words about “economic democratization.”

The term could be dismissed as a pie-in-the-sky buzzword if it wasn’t enshrined in the 1987 Korean Constitution. The second clause of Act 119 defines economic democratization as “the achievement of harmony among economic parties” through “balanced economic growth, stabilization and an adequate distribution of incomes.” It proscribes “abuses of economic dominance and power,” which may require “imposition of restrictions and adjustments on the market.”

The definition and validity of the idea, and policies that relate to it, are almost guaranteed to continue through the December presidential election and possibly beyond. Politicians from both the ruling and opposition parties are chin-deep in rhetoric and proposals on how to force Korea’s economy to be more “democratic,” and what economic direction the next administration should take.

The discussion comes at a time when Koreans have come to admit they are living in an unfair society with ugly income disparities and a widening gap between the rich and poor. Rapid economic progress during the past decades had obscured those gaps. Slowing economic growth makes them inevitably noticeable.

The inequality issue often crystallizes in discussions about fair competition between the country’s industrial behemoths and its small- and medium-sized enterprises (SMEs).

Critics say the gap between large and small firms has grown wider during the Lee Myung-bak administration due to its business-friendly policies, which favored large companies.

At the core of the problem in the public’s eye are the people and families that run those large businesses. Of 63 businesses categorized as conglomerates by the Fair Trade Commission (FTC), 43 are run by private owners and their family members. The balance is run by professional managements unrelated to the founders of the enterprise.

Korea’s conglomerates, which such familiar names as Samsung and Hyundai, are known internationally as chaebol. But domestically, the term also refers directly to the family that controls the enterprise and the head of that family. The Chinese character for “jae” (or “chae” in the transliteration used in the past and by news organizations still) means fortune; the character for “beol,” or “bol,” means head of an influential clan.

As a result, the word has become a symbol of unfairness because those families possess such seemingly untouchable influence on the nation’s economy, politics and society.

In the past, the conservative line was that what was good for the chaebol was good for Korea, and pro-chaebol policies were automatically pro-growth. Liberals and reformers wanted to put restrictions on them.

In this election season, both sides of the political divide are proposing restrictions on the chaebol in the name of “economic democracy.”

According to a recent analysis by the FTC, the owners of the country’s 43 largest conglomerates hold fewer percentages of shares in their groups than before. Samsung Group Chairman Lee Kun-hee holds only 0.02 percent of his group and Lotte Group Chairman Shin Kyuk-ho only 0.52 percent. But the families’ dominance over the groups continues to expand.

The FTC also described the complex shareholding structures of major conglomerates, a hallmark of Korean big business from the start.

So as the election draws nearer, the conglomerates are the bull’s eye of most politicians’ targets.

The first bill, submitted on July 16 by a group of 24 members, would require chaebol family members to be imprisoned for 15 years or more if they embezzle more than 30 billion won ($26 million) of corporate money.

It stipulates a minimum prison sentence of three years for those found guilty of stealing from companies’ coffers. The law would ban courts from sentencing guilty chaebol family members to probation, which they have frequently done in the past.

A second bill, submitted on July 25, bans companies set up privately by chaebol family members from being named subsidiaries of the groups. Under the law, conglomerates just need to report to the FTC if they want to add privately established companies to their groups.

According to the FTC, those private companies get special treatment from parent or sister companies at the expense of SMEs.

The Saenuri Party’s presidential hopeful Park Geun-hye has talked about unfair practices by conglomerates and lenient penalties given to them when they are caught, and those themes are likely to show up in her campaign platform.

The Democratic United Party, the largest opposition party, wants to tackle unfair trade practices by chaebol, such as placing orders with their own subsidiaries or companies run by their family members, and squeezing out business opportunities for SMEs.

The opposition is calling for more radical measures than the Saenuri party. The DUP wants restrictions on conglomerates, including a limit on the maximum amount of shares allowed to be held by owners, banning subsidiaries of a group from investing in each other and prohibiting conglomerates from running financial businesses.

The DUP wants to limit the amount of shares that a subsidiary of one of 10 largest conglomerates in the country can own in any company. The current limit is the equivalent of 40 percent of its own assets. It wants to lower that cap to 30 percent. It also wants to put an outright ban on inter-subsidiary shareholding within a group. In order to prevent industrial behemoths from owning banks, the party wants to restrict them to a maximum of a 4 percent stake in a bank, cutting the current 9 percent cap. And the DUP wants to further restrict the amount of money conglomerates can borrow by lowering a corporate debt-to-capital ratio from 200 percent to 100 percent. 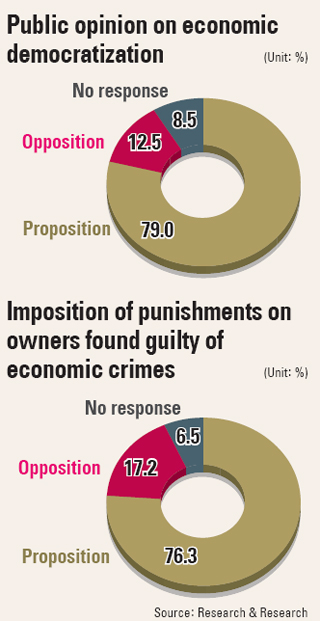 In Korea, it’s never a surprise to see a titan from one of the 10 largest conglomerates entering a prosecutors’ office or a court on TV screens. Usually they glide in perched on wheelchairs because of alleged health problems. They usually glide out with light punishments even for serious crimes.

Samsung Group Chairman Lee Kun-hee was sentenced in 1996 to two years in prison and three years of probation on charges of having a slush fund during the Roh Tae-woo administration, but was granted a pardon 402 days after the sentencing. In 2009, Lee was sentenced to three years in prison and five years of probation on charges of tax evasion. Again, Lee was pardoned 139 days after the sentencing.

Hyundai Motor Group Chairman Chung Mong-koo was sentenced to three years jail and five years of probation for having a slush fund in 2008, but he was also pardoned 73 days after sentencing.

SK Group Chairman Chey Tae-won was sentenced to three years in prison and five years of probation on charges of accounting fraud in 2008. Chey was released after 78 days.

No chaebol chairman has actually served prison time after being sentenced to jail on charges of embezzlement or breach of trust. Even before their pardons, they spend their time at home under police watch.

According to a survey by an anti-conglomerate Web site called chaebol.com, there were 23 jail sentences handed down to chairmen of top conglomerates in the past two decades, but all were given amnesty and put on probation.

Most of the times, the tycoons are forgiven in recognition of their contribution to economic growth.

In a recent survey on the subject of economic democratization by the Saenuri Party, eight out of 10 respondents said they support the idea of reforming the current structure of the Korean economy and the role of the chaebol. More than 70 percent said harsh punishments for economic crimes are needed.

Amid the ongoing controversy over economic democratization, the spotlight is on the legal difficulties of SK Group’s Chey Tae-won and Hanwha Group Chairman Kim Seung-youn.

In January, Chey was indicted without physical arrest for allegedly embezzling 180 billion won from the group. His younger brother, Vice Chairman Chey Jae-won, was charged with misusing 99.2 billion won of company money to cover personal investments in futures and options.

Hanwha’s Kim was recently sentenced to nine years in prison and a 150 billion won fine for tax evasion and submitting falsified documents to the FTC. The prosecutors said there will be no leniency on the case. 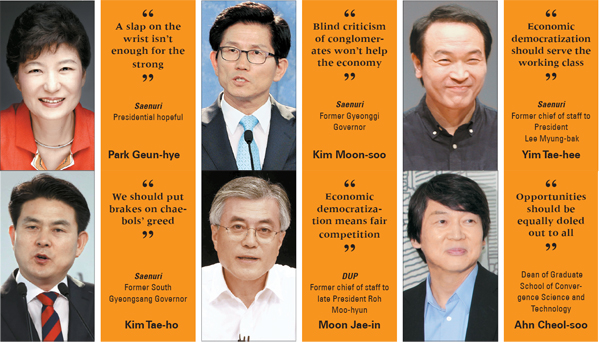 At heart of debate

How unfair is Korean society economically?

One important measure is the size of the middle class. According to Statistics Korea, after hitting its peak of 75.4 percent in 1992, the percentage of Korean middle-class households plunged to 62.6 percent in 2009 in the wake of the U.S.-triggered financial crisis in 2008.

Korea’s Gini coefficient, which measures inequality in income distribution, rose from 0.306 in 2006 to 0.314 in 2009. A figure close to one suggests inequality is increasing, while reaching a figure closer to zero means greater equality.

A report by the Korea Development Institute (KDI) showed Korea’s relative poverty rate stands at 14.6 percent, higher than the 11.1 percent average of 34 OECD countries. The relative poverty rate shows the portion of households where incomes are less than 50 percent of those in the middle income bracket. The KDI said in the report that a more serious problem than income inequality is accelerating poverty in Korean society.

Economists express worries that politicians may hinder economic growth when they overuse populist bills only to garner votes in December.

“Radical reform plans will be pouring out as the election nears, but I doubt that many of them would be effective,” said Kim Sang-jo, a professor at Hansung University and chairman of Solidarity for Economic Reform, a liberal economic think tank.

“The controversy in society over the need for restrictions on chaebol lacks sufficient discussions based on rationality,” said Kim Hyun-jong, a researcher at Korea Economic Research Institute.

Lee Keun, a professor of Seoul National University calls for a broader perspective.

“Recent increases in inequality stem from ownership of financial assets,” Lee said. He pointed out there are many things to regulate in the financial sector, including purchases and sales of stocks and taxation on profits from financial transactions, but the current controversy is overly focused on blaming industrial capital for all of Korea’s problems.

“It is better punishing conglomerates for what they have done after things have happened than regulating them beforehand,” he said.