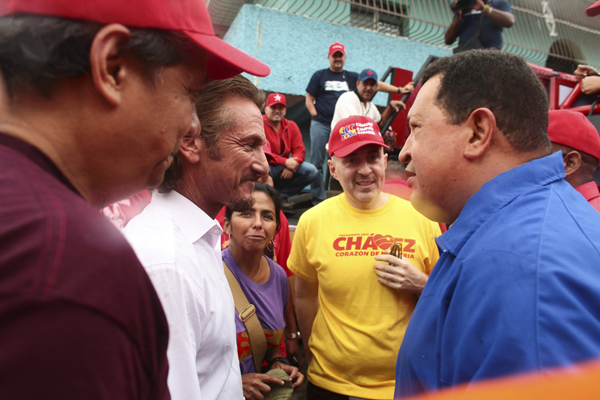 CARACAS, Venezuela - U.S. actor Sean Penn joined President Hugo Chavez at an election rally in Venezuela on Sunday, bringing a dash of Hollywood to the campaign as he rode with him atop a truck past cheering supporters.

Penn is a friend of Chavez, who hopes to win a new six-year term on Oct. 7. The campaign has turned into the toughest fight of the president’s political career.

“Thank you very much for visiting us again, dear friend,” Chavez said after introducing Penn to the big crowd in the central city of Valencia. “We’re all Americans, from the north, the center, the south. Long live the American continent!”

Penn, in a white shirt and sunglasses and accompanied by Argentine producer Fernando Sulichin, waved from the stage, fist-bumped and hugged Chavez, but did not address the rally.

The Oscar-winning actor, screenwriter and director is well known for his political and social activism. He was a vocal critic of the administration of former U.S. President George W. Bush, and was involved in humanitarian efforts following Haiti’s earthquake and Hurricane Katrina.

Last year, Penn worked for the release of two U.S. hikers who were arrested in Iran, flying to Venezuela to ask Chavez to intervene on their behalf with Iran’s leader.

Most polls in South America’s top oil exporter give Chavez a double-digit lead ahead of the vote. He says he is completely cured after three cancer operations in the last year, although few details have been released about the 58-year-old’s condition.