With gold, Bolt leaves doubters in the dust

With gold, Bolt leaves doubters in the dust 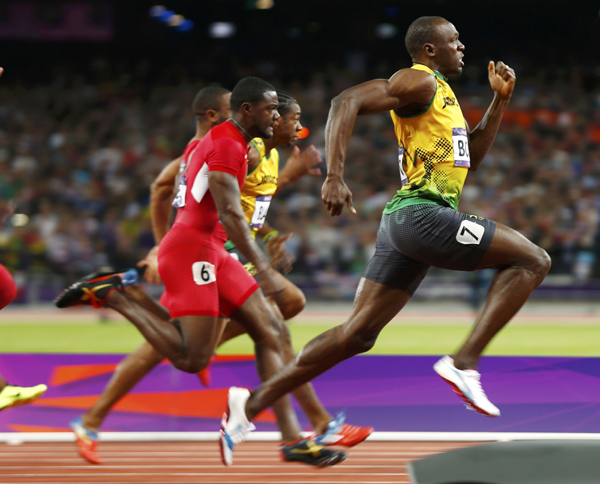 
London - Beat Usain Bolt at your peril. He is bound to get you back when it matters most.

Any questions that Yohan Blake raised by beating the defending 100-meter Olympic champion during the Jamaican trials a month ago were emphatically answered with the second-fastest time in history on Sunday. And it leaves Bolt one step away from achieving his ultimate goal - becoming a “living legend” by defending his Olympic 100- and 200-meter titles. He’ll race in Tuesday’s qualifying heats for the 200 meters, his favorite event.

“Right now, I need this to become a legend. That’s my main event. That’s what I do. I’m not going to let myself down,” Bolt said. “When Yohan Blake beat me, twice, it woke me up, opened my eyes.”

And on Sunday, he left Blake and 2004 Olympic champion Justin Gatlin in his wake.

World champion Blake equaled his personal best with 9.75 and Gatlin took bronze in 9.79.

Unlike his showboating and coasting during a then world-record run at Beijing four years ago, Bolt was all business this time around.

He was not even distracted when a fan threw a plastic bottle toward the start about a second before the start.

Bolt ran on, then knelt and kissed the track before standing and assuming his trademark “To The World” pose - pointing both fingers in the air for the first time during the Games.

Blake celebrated with Bolt, the pair embracing in front of Jamaican fans in the packed stadium.

Bolt has been troubled by a stuttering start since he was disqualified for a false start in the final of last year’s world championship in Daegu, Korea, which brought Blake to the fore. In London, he proved that even with a slower kick out of the blocks, he still is in a class by himself.

But the 1-2 Jamaican finish confirmed the domination of the Caribbean nation of 2.9 million in its sprint rivalry with the United States.

One day earlier, Shelly-Ann Fraser-Pryce defended her Olympic title in the women’s 100, with Carmelita Jeter the lone American on the podium.

The United States did get its first gold of the athletics program at London when Sanya Richards-Ross held off a late charge by Britain’s Christine Ohuruogu to win the women’s 400.

One day after his Olympic debut, double-amputee Oscar Pistorius failed to reach the final of the 400 meters, finishing last in his semifinal heat.

The sprinters were racing under partly cloudy evening skies, only hours after the women’s Olympic marathon set off and finished in pouring rain. And, as unpredictable as the British weather, Ethiopia’s Tika Gelana upset the favored Kenyans.

It was the second long-distance battle the Ethiopians won over the Kenyans. And just as Tirunesh Dibaba made her finishing kick count in the 10,000 meters on the track, Gelana left it until late to kick for the line.

With clenched teeth she finished in 2 hours, 23 minutes and seven seconds, an Olympic record.