Menswear sales are a preview of slowdown

Menswear sales are a preview of slowdown 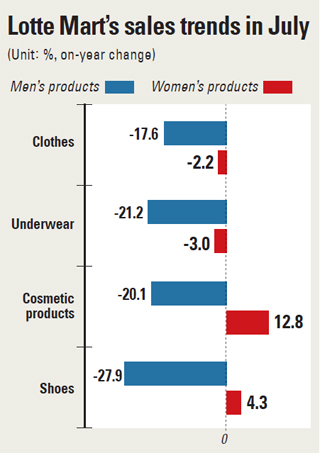 According to Lotte Mart’s sales analysis on fashion and accessories for last month, sales of products for men fell much more than products for women.

Sales in menswear often served as an indicator of economic recession, as men tend to refrain from spending except for essential items when times get tough, while women switch to more affordable products but keep on shopping and buying.

Sales growth of almost every men’s items ranging from suits, shoes, belts, underwear to hair dye dropped except for packs of five pairs of summer socks at the discounted price of 10,000 won ($8.86). 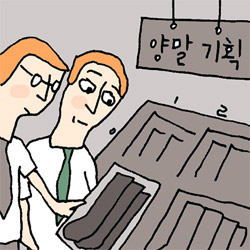 In contrast, sales of women’s’ clothing dropped by a mere 2.2 percent.

In shoes, the difference in spending patterns by men and women was apparent with a 27.9 percent decrease in men’s shoes sales compared to a 4.3 percent sales increase in that of women.

Sales of men’s underwear fell by 21.2 percent while that of women’s lingerie decreased by 3 percent.

Consumption of seasonal cosmetics for summer and sandals grew for women, but not for men.

“If the current economic downturn continues, sales of men’s products will drop further than those of women. As difference in consumption by men and women is obvious, we are searching for a marketing strategy to boost demands for men’s fashion items,” said Nam Chang-hee, marketing director at Lotte Mart.

The only men’s item with growth were discounted socks, which are considered daily necessities.

“The sales growth of men’s socks on sale was 20 percent,” said an employee at Lotte Mart.

“In the aftermath of the recession, an economical spending pattern is distinct,” he added.