Local companies sponsoring sports that are usually a turnoff for Koreans are smiling these days as Korea wins most of its medals in those sports at the London Olympics.

Unlike football, baseball or basketball, those sports are considered “unpopular sports” in Korea. But the companies that endorsed their athletes found a golden opportunity to polish their brand images.

“It implants a positive image to the public that the corporations are being socially responsible,” said Kim Yong-man, a sports management professor at Dankook University. “When people know that such a corporation was behind an athlete’s success, it upgrades the likability of the brand and its product, which could eventually improve the company’s earnings as well.”

According to a survey conducted by Korea Chamber of Commerce and Industry (KCCI) last month, 71.4 percent of nation’s top 100 companies said they were hoping to enhance their brand image through Olympic-related marketing.

More than 20 percent of the Korean athletes in London are sponsored by major companies, according to the KCCI.

“These unpopular sports rarely get publicity in normal days,” Kim said. “But when it comes to the Olympics, they are the medal collecting field and that becomes the right time for the companies to show their contributions.”

Already some companies benefitted from the athletes’ medal earning performance and used it as a good tool to publicize their contributions. 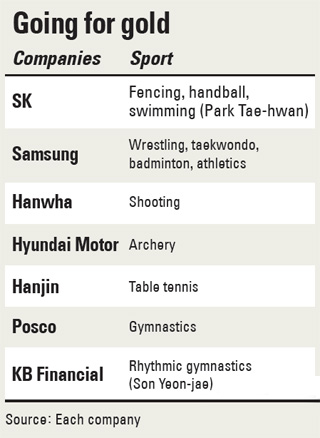 The day after Jin’s victory, the telecommunication giant KT placed advertisements in major newspapers celebrating the shooter’s achievement, while launching special promotion and events until the end of the Olympics this Sunday.

KT owns and runs its own shooting team and Jin is on it.

Hanwha Group, a conglomerate that has also been supporting shooting in Korea, also celebrated the 31-year-old’s accomplishment. The company emphasized that it founded a shooting team in 2001 and held a local tournament in 2008 to give more opportunities to the promising shooters.

Since one of its senior executives, Kim Jung, was appointed president of the Korea Shooting Federation in 2002, the company said it has spent more than 8 billion won ($7.01 million) to develop the sport.

The group was delighted again when teenage shooter Kim Jang-mi won the women’s 25-meter shooting last Wednesday and Jin grabbing his second gold medal in the men’s 50-meter shooting on Sunday. Hanwha Group chairman Kim Seung-youn yesterday said he will give a reward to the national shooting team.

“Of course, we’re happy when our sponsored sports do well at the Olympics,” an employee from the Hanwha Group PR team said. “You can’t directly publicize what we have done for the sport because it gives the impression the company is just ‘showing off’ to the public. But with these good results, we thought it’s about time we show our contribution.”

SK Group also hit the jackpot at this year’s Summer Games since the sport it sponsors, fencing, turned out to be the biggest contributor to Korea’s medal tally in London.

With the drama surrounding female fencer Shin A-lam, who was denied advancement after a timekeeping error, and surprise gold medals from Kim Ji-yeon in the women’s sabre competition and for the men’s sabre team, fencing grabbed fans’ attention more than usual and put the spotlight on SK Group’s sponsorship.

SK Telecom has been helping the Korean Fencing Federation since 2003. After the company’s honorary chairman, Son Gil-seung, took the chief job at the federation in 2009, it has spent 1 billion won in a year on the sport, according to the company.

SK Group now hopes that Korea women’s handball team, which has reached the quarter finals, will win a medal.

The group is famous for supporting handball.

Hyundai Motor Group was also a big winner after its supported sport, archery, collected three gold medals and one bronze.

The company has been publicizing that it helped the Korea Archery Association for nearly 30 years since Chairman Chung Mong-koo was first appointed as the chief of the association in 1985.

From 2005, his son Chung Eui-sun has taken charge of the association. The automaker said it has spent more than 30 billion won so far to develop the sport.

Meanwhile, Samsung Group hopes its sponsored athletes in table tennis, wrestling and taekwondo will collect medal, while KB Financial Group is hoping rhythmic gymnast Son Yeon-jae will perform well. According to the advertising agency Innocean Worldwide, Samsung Electronics and KB Financial Group are the two companies that used Olympic stars in the most number of advertisements.