Saenuri to kick out two for scandal

Saenuri to kick out two for scandal 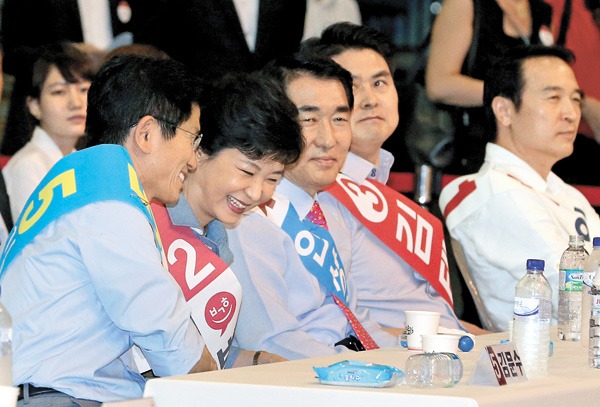 
The Saenuri Party yesterday decided to expel Representative Hyun Young-hee and a former nomination committee member Hyun Ki-hwan over their alleged involvement in the money-for-nomination scandal. 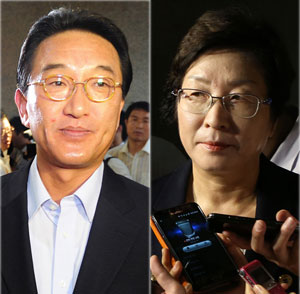 The Ethics Committee of the conservative ruling party yesterday made the decision.

“All the committee members unanimously agreed to expel them,” Representative Kyung Dae-soo, chairman of the committee, said. “The reason for the expulsion is that they have done extreme harm to the party and disgraced its honor.”

Kyung also said Representative Hyun has failed to obey the party’s order to submit statements to verify the scandal. She also refused to attend the ethics committee meeting, Kyung said. Still, there are actions to be taken before they are officially removed from the party.

The motion to kick out Representative Hyun must be approved by two-thirds of the party lawmakers, while expelling Hyun Ki-hwan requires approval at the Supreme Council.

After the expulsion is confirmed, they will be banned from returning to the party for five years. Because she is a proportional representative, Hyun will still be able to keep her lawmaker seat without party affiliation if she is expelled. A proportional lawmaker loses the seat when he or she leaves the party voluntarily.

The first-term lawmaker from Busan was accused of paying 300 million won ($265,800) to Hyun Ki-kwan, a member of the nomination committee, in March to gain a nomination in the April 11 legislative elections.

The alleged nomination-buying was made public when the National Election Commission asked the prosecution last week to launch an investigation based on the testimony of her former aide.

Representative Hyun, however, denied the charges, arguing that her former aide was getting back at her after she refused to hire him in her office at the National Assembly. She also refused to leave the party voluntarily.

Despite their strong pleas of innocence, the Saenuri Party took a quick and harsh step to sever its ties with them amidst growing concerns that the scandal will cast a shadow over the presidential campaign of Park Geun-hye. Park was the emergency chairwoman of the party and her key reform projects included transparent and fair nominations during the April general elections.

On Sunday night, Park and four other candidates of the party’s presidential primary agreed that Chairman Hwang Woo-yea will take responsibility if the prosecution’s probe leads to indictments.

The opposition Democratic United Party criticized the Saenuri Party’s handling of the situation.

“I have been in politics quite a long time, but it really baffles me,” said DUP Chairman Lee Hae-chan.

“Park was the one who supervised the nomination, and [her loyalist] Hyun Ki-hwan was a nomination committee member,” Lee said. “But Chairman Hwang will take responsibility for the scandal. It just doesn’t make any sense.”

Lee said Park must seriously apologize to the public and assume responsibility, calling her apology issued on Sunday “just a few passing remarks.”

The DUP also issued a statement criticizing the Saenuri Party’s decision to kick out their party members.

“The Saenuri Party must have been very anxious,” the DUP said, adding that kicking out lawmakers in trouble has become the “staple of Park Geun-hye’s irresponsible politics.”

Park yesterday tried to stop the scandal from spreading further by offering another apology.

“This is an intolerable, grave crime if it is true,” she said yesterday at the Saenuri Party’s presidential primary candidates’ joint speech session. “No one will enjoy sanctuary from this.”

“Whether it is true or not, I apologize to the people and the party members,” Park said. “I will carry out systemic reform to completely eradicate nomination corruption from our politics.”

While the scandal continued to rock the political arena, prosecutors uncovered more evidence to back the allegation. The Busan District Prosecutors’ Office also summoned Representative Hyun yesterday as a suspect in the nomination-buying scandal.

The JoongAng Ilbo reported Monday exclusively that the prosecution has obtained an important piece of evidence to back the graft allegation.

Jung Dong-geun, a former aide to Representative Hyun and the whistleblower of the case, took a photo of the shopping bag stuffed with cash before handing it over to an associate of Hyun Ki-hwan, and the Busan District Prosecutors’ Office has obtained the evidence, sources at the prosecution told the JoongAng Ilbo.

According to the sources, Jung handed over the money to Jo Gi-mun, an advisor of former Saenuri Chairman Hong Joon-pyo, at Seoul Station on March 15.

On his way to Seoul from Busan aboard the bullet train, Jung used his mobile phone to take a photo of the shopping bag stuffed with cash. The photo showed 60 bundles of 50,000-won notes inside the bag.

The prosecutors obtained the phone from Jung on Saturday and confirmed the image file’s data to match his claim, sources said.

After handing the money to Jo, Jung left before Hyun Ki-hwan arrived, so it was not confirmed if the bribes were actually delivered to the former nomination committee member or not.

The evidence also showed that Jo lied to the media about his whereabouts on March 15.

Jo told the JoongAng Ilbo and JTBC that he was not in Seoul but in Busan that day, citing records from his personal planner.

Then he changed the statement on Saturday and said he went to Seoul on March 15 to run errands in Gangnam.

The prosecution also learned from Jung that Representative Hyun gave money to other lawmakers close to Park after her nomination was secured on March 20.

About five people received up to 500 million won each, Jung claimed.