Celebration in California as rover lands on Mars

Celebration in California as rover lands on Mars 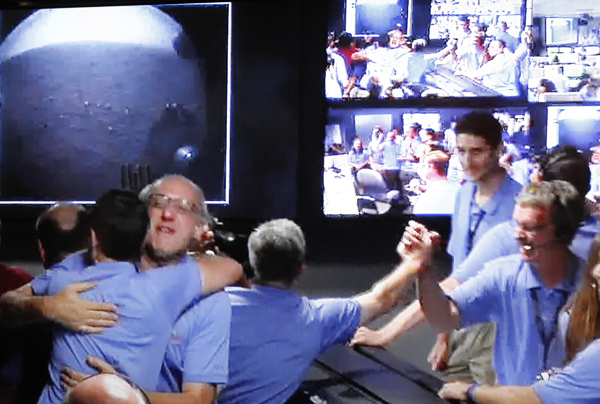 Members of the Mars Science Laboratory team congratulate each other after receiving the first images from the U.S. National Aeronautics and Space Administration’s Mars Curiosity rover in the Jet Propulsion Laboratory in Pasadena, Calif., late Sunday, as captured from footage on NASA TV. The rover landed successfully on Mars’ Gale Crater at 10:32 p.m. Pacific Standard Time, after an eight-and-a-half-month journey covering 567 million kilometers (350 million miles).

A grainy image beamed back depicts the rover casting a shadow over the Martian surface. Curiosity will spend two years exploring the crater and terrain and looking for evidence of life forms called microbes on the Red Planet. The rover was launched Nov. 26, from Cape Canaveral, Fla., and is equipped with high-tech instruments that can analyze the surface and atmosphere and beam results back to Earth. [REUTERS/YONHAP]