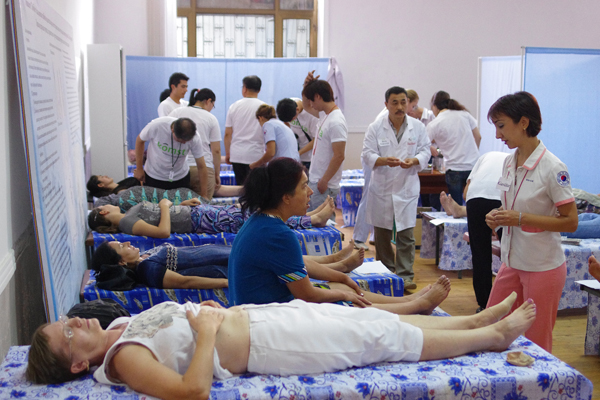 Local residents receive free treatment from volunteer Korean doctors of Oriental medicine in a clinic in Tashkent, Uzbekistan, on July 26. By Shin Sung-sik


TASHKENT, Uzbekistan - On a scorching hot summer day in Tashkent, the capital city of Uzbekistan, there was a line of at least 50 local residents visiting a local clinic run by the South Korean government.

The clinic quickly became popular in the region when people found out it was offering free Oriental medicine.

The four-day medical care service started on July 26, with the aim of providing free herbal and acupuncture treatment for local residents.

The Korean Oriental Medicine Service Team Abroad (Komsta), founded in 1993 under the auspices of the Ministry of Health and Welfare has led the volunteer programs in 27 countries since then, treating some 130,000 patients and providing funds of 200 million won ($177,147) annually.

For this year’s 114th treatment session, a total of eight South Korean doctors volunteered and worked from 9 a.m. to 6 p.m. with little rest due to the surging number of patients. Nine officials of the Korea International Cooperation Agency residing there also assisted with the program. This is the ninth time Komsta is visiting the country, the first time in 1996.

In an old and leaky local hospital, despite the poor medical equipment and facilities, the popularity of the Korean doctors was surprising.

Local officials say that their system only takes reservations two or three times a year, but it is quickly overloaded with applicants.

One of the patients was Alimoba Mameulagat, a 67-year-old Uzbek woman who was suffering from pain in her legs. She arrived at the hospital at around 5 a.m. and waited for it to open at 9 a.m. in order to take a number. Lee Chun-jae, a herbal doctor based in Yongin, Gyeonggi, greeted her with the help of an interpreter.

“Can you hear me? How are your legs?” She answered, “I couldn’t walk well before, but the pain has lessened after your treatments.”

Lee had her lie on the bed and administered acupuncture needles. As the old woman was also obese, Lee applied needles to her hips to help dissolve fat.

After the 15-minute-long treatment, the woman told Lee, “I want to invite all of you doctors to my house so I can cook for you.”

All local residents, including ethnic Koreans, are able to apply for the free service. Only Korean nationals who live in Uzbekistan pay a small fee.

A JoongAng Ilbo reporter accompanied the doctors as a volunteer and in four days witnessed at least 1,500 patients at the center. Most patients were prescribed not only herbal medicine but anthelmintic drugs, which are difficult to obtain in the region.

“The fact that the reservations are all filled up this year means that the popularity of our treatment methods has drastically risen,” Shin Yeong-il, one of the volunteering doctors, said.