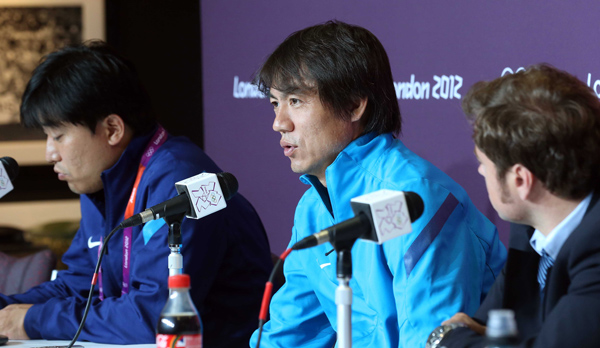 
After arriving at Old Trafford yesterday ahead of a semifinal match against Brazil, Korea’s Olympic football coach Hong Myung-bo expressed confidence against the five-time world champion.


Korea, coming off a 5-4 penalty shoot-out win over Great Britain on Sunday, will tackle Brazil, another favorite at London Olympics, in Manchester at 3:45 a.m. tomorrow KST.


Hong said his athletes could lack behind their Brazilian counterparts physically, more so after a drawn-out quarterfinal match against the host team supported by massive home crowds at Cardiff, Wales and an ensuing four-hour travel to Manchester. Defender Kim Chang-soo and goalie Jung Sung-ryong sustained injuries against Great Britain will unlikely play in the Brazil match.


But, Hong said his team is mentally fit, psychologically boosted and will be ready in time to put up a strong fight similar to the one against Great Britain. “We will enter the game in the best condition,” he told a media conference held at Old Trafford.


Brazil boasts lopsided wins against Korea in the matches between young players, winning nine in the 10 U-20 showdowns. The Samba team knocked Korea out of several crucial matches including the FIFA World Youth Championship in Mexico, 1983, where it crushed Korea 2-1 at the semifinal. In the 2007 FIFA U-20 World Cup, Brazil beat Korea 3-2 in the group competition.

According to the JoongAng Ilbo yesterday, all of 20 major betting companies in Europe all bet Korea’s loss against Brazil. The European betters saw Korea’s chance to win a gold medal as a long shot at 20/1, meaning the bet of 1 euro will earn 20 euros, but at a slight chance as much. It was the lowest among the four semifinalists. Brazil was closest at 1.4/1.

Hong said Korea will be humble against the strong opponent, seeing it as a good opportunity to learn. “A match against a strong team such as Brazil will be a big help for the growth of the players,” he said. Still, he was resolute for a win, saying that winning the two remaining matches for Korea will help take their players to next level. The winner of loser of the other semifinal match between Japan and Mexico will play Korea on Saturday, depending on the result of the two semifinal matches.

Hong said his team will prepare for Brazil’s strong offense, including Neymar, a striker who scored three out of 12 goals in Brazil’s four previous matches. He said Brazil has many other stellar players as well, so his team will try balancing its defense against it.

Brazil, which defeated Great Britain 2-0 in a tune-up match last month, also refused to take for granted winning against Korea, speaking highly of their stamina and endurance exhibited during the quarterfinal match.

“South Korea has a very intense game, their players can keep up the pace during the entire match,” Brazil coach Mano Menezes was quoted as saying by The Associated Press at a media conference yesterday.