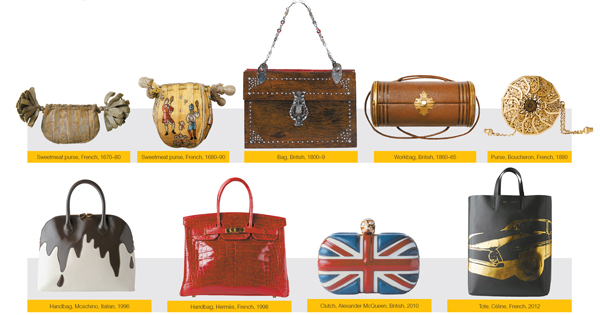 Handbags are hardly ever taken seriously, belittled as mere accessories or small-but-expensive luxuries no matter how well crafted they may be. BagStage aims to change that.

Inside there is a do-it-yourself workshop where you can make your own bag and a shop where 500 types of leather material - including alligators and crocodile hides - hang from clothing racks.

The highlight of BagStage is the Simone Handbag Museum on the third, fourth and fifth floors. From Hermes’ blood-red Birkin bag that is worth 100 million won ($86,956) to a scent bag used by high-class women in mid-16th century Italy, the museum has about 350 handbags with a combined worth estimated at 1.8 billion won.

Far left: Handbags produced from the 16th to 19th centuries are displayed on the fourth floor of BagStage. The top-left handbag in the far-right showcase is the oldest on display, made in Italy in 1550. Left: The BagStage building was designed to resemble a handbag.


The building and museum are the brainchild of Simone Limited, a Korean company which has designed and manufactured handbags for 26 brands, including DKNY, Michael Kors, Kate Spade, Polo Ralph Lauren and Coach for 25 years.

“People ask me why women love handbags and when the first handbag appeared on the earth because I’ve been in this field for so long,” said Simone CEO Kerry Park in a press release. “I naturally thought it would be good if we could make a place to answer to these questions and mark the 25th anniversary of my company.”

Judith Clark, former curator of the Victoria and Albert Museum in London who has expertise in museology and fashion, took responsibility for the museum project three years ago. She worked with 17 staff members to assemble and display the handbags.

“The hardest thing was we had to do it in two years,” says Jung Dawn, a curator at the Simone Handbag Museum. It was particularly challenging to find old handbags in good condition.

While it may have been a tight schedule, the outcome is stunning. Handbags of various periods are displayed in an interesting and organic way.

The exhibition begins with today’s bags. An avant-garde mannequin holds a Union Jack skull clutch made in 2010 by British designer Alexander McQueen. The hair style and dress match the clutch and seem as though they could have been made by the late McQueen.

“Many people ask whether they are clothes by McQueen but they are not,” says Jung. “We had staff members who created matching clothes and hairdos to each handbag after historical research.”

The exhibit traces the evolution of handbags from the 15th and 16th centuries, when women carried mostly personal items such as combs and handkerchiefs and handbags used drawstrings.

When an increasing number of women started working outside the home, handbags got bigger, sturdier (metal frames) and more secure (locks).

“As women’s lives changed, the things they carry have changed, too - from smelling salts and coins to cell phones and wallets full of credit cards today, plus makeup, aspirin, keys, ID, etc.,” says Valerie Steele, a fashion curator and director of the museum at the Fashion Institute of Technology, New York, via e-mail.

“When I wrote ‘Handbags: A Lexicon of Style,’ many women told me that the handbag was their life in miniature - everything they needed to get through the day,” says Steele. “Handbags are not only fashion accessories, they are an important part of women’s lives.”

The history of handbags is interesting, but when visitors are ready to shop, they head for the first and second floors where the handbags are displayed. 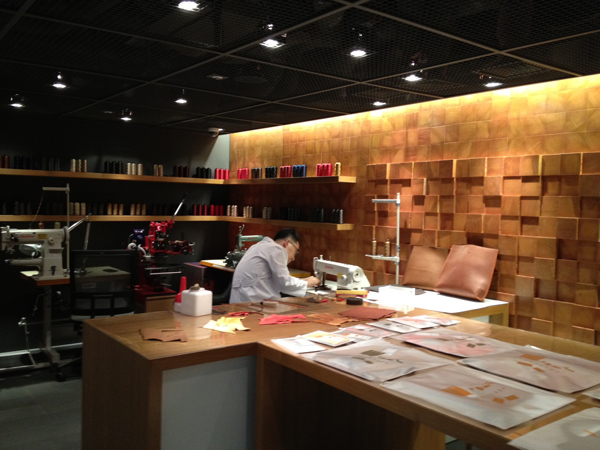 A workshop allows do-it-yourselfers to make their own handbags.Provided by Simone Limited


Foreign brands, which are well-known outside but scarce in Korea, such as Rebecca Minkoff and Milly, are available on the second floor.

The first floor is devoted to the new 0914 brand of Simone, and all merchandise on display is for sale.

The cafe, museum shop, DIY workshop and select shop are on the two basement floore.

The cafe has, of course, a handbag theme with stone sculptures of handbags and handbag-print chairs. During happy hour between noon and 2 p.m., espresso drinks are half price.

The DIY workshop is popular with young women who want to make their own bags or one as a gift. Kits start at 100,000 won. After receiving simple instructions from a BagStage employee, it takes about an hour to finish a pouch or bag.

The select shop is where the work of three young designers is for sale. Simone has provided the space to the designers free of charge.

Take subway line No. 3 and get off at Sinsa Station, exit No. 8. The museum opens at 11 a.m. Tuesday through Sunday. Admission is 5,000 won. The museum is currently hosting an “Italian Carousel” handbag exhibit.