Kim Youngna recalls her life at the museum

Kim Youngna recalls her life at the museum 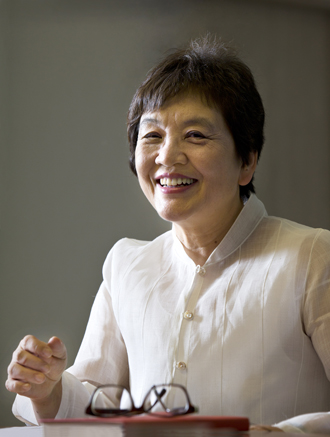 Like most people, Kim Youngna first encountered museums through her parents.

But for her, museums were more than just a place to visit during summer vacation. They were her home and playground, eventually becoming her workplace and lifetime passion.

Kim’s father - Chewon - was the first director of the National Museum of Korea, from independence in 1945 to 1970.

The young girl who played in the museum grew up to study Western art and fell in love with the work of Pablo Picasso. But she eventually came home to become director of the National Museum and continue the work begun by her father.

For the last year and a half, Kim has been trying to promote the museum as a part of day-to-day life ? where people can go for dates and family outings ? as it was for her.

Those efforts may be starting to pay off. On Tuesday, the number of visitors to the museum since it moved to the current Yongsan District location in 2005 surpassed 20 million.

The Korea JoongAng Daily sat down with Kim to ask about her memories of the museum and vision for the future. 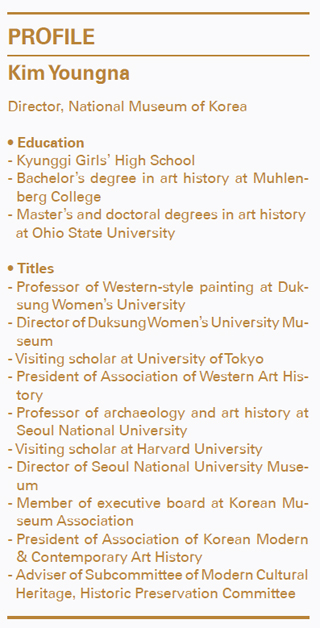 Q. When was the first time you went to a museum? And what was your impression?

During colonization, Japan’s resident-general built a large house on Mount Namsan. I believe it was where the Seoul Youth Hostel is currently located. And that is where the National Museum was for about a year in 1954.

Next to the house, there was another house that belonged to a Japanese secretary-general. And that is where we lived. I remember the house was full of weeds when we moved in. It was large, though. There was a pond and goldfish. And there were nightingales and they sang.

The first time I went to a museum was then. I was 3 years old. I remember there was a gingko tree ? a male one. There weren’t many workers at the museum and they were like part of my family. My father was always busy with work related to the museum.

In 1955, the National Museum moved to Seokjojeon in Deoksugung Palace. I remember skating in a pond within the palace. I also remember how in 1957 the museum held exhibitions at venues in eight cities in the United States, including at the National Gallery of Art in Washington.

During that period, Korea was known only as a country where there was a war. But through the exhibitions, we let the world see some of our ancient art. We took some precious items, including golden crowns and earrings [from ancient times].

What would your father say if he could see the National Museum of Korea today? And what is the greatest lesson you learned from him?

I think he would be really impressed.

I remember when the National Museum had to move into the current National Folk Museum of Korea building in Gyeongbok Palace in 1972, and he hated it. He didn’t want to go there.

But when the museum moved to the Joseon Government-General building in Gwanghwamun in 1986, my father felt quite overwhelmed. Some people argued the building had to be demolished as a remnant of Japanese colonization. But to my father, the idea that Korea’s National Museum was going into where the Japanese Government General of Korea had been was quite powerful and symbolic.

So my father would be extremely pleased to see the large grounds and high-tech facilities of the National Museum of Korea today. I think he didn’t have a clue that I would be the director, though. I would like to give him a tour around the museum. When I became the director of the Duksung Women’s University Museum, he said it was funny. I remember he came over to the museum and said he hoped to see it grow to be a better museum.

One lesson my father taught me was the importance of fostering talent. He always said that in order for the National Museum to be an internationally acknowledged institution, we needed to foster talent. Back then, education in Korea was insufficient in areas of archaeology or art history. So we had to send people overseas to help them become experts in those areas. He spent a majority of his time writing letters overseas for such causes. 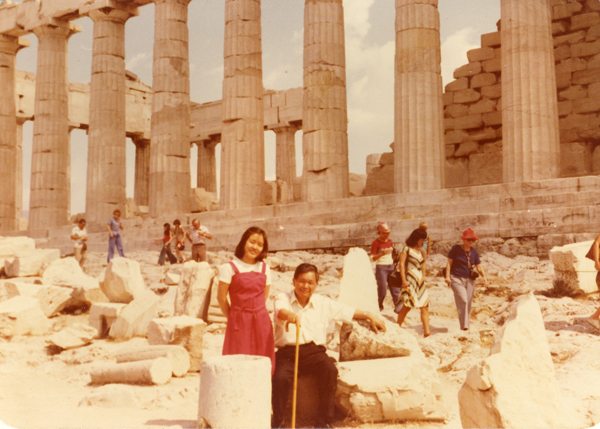 Kim Youngna stands next to her father at the Parthenon in Greece in 1974.


It’s been 17 months since you took the helm of the National Museum of Korea. What do you see as some of your achievements so far?

Among other things, I have worked to change the display techniques. For instance, one thing I noticed when I first came here was how the relics were put at the bottom and explanations hung at eye level. So visitors would have to look down to examine the relics.

So I have worked to change that. Actually, you can see such a change at the prehistory and ancient history section. The problem is the museum is so large, so I can only do it little by little. It takes time.

Also we are working to change three spaces ? housing Bangasayusang (a gilt-bronze statue of Maitreya Bodhisattva, seated and pensive), golden crowns and Buddhist art ? collaborating with Opera, a Netherlands-based company that specializes in museum design.

I also have been working to make this museum a better one for foreigners by improving our English-language signs. About 5 percent of visitors to our museum are foreigners, compared to 50 percent for the Louvre Museum.

Last year at the National Museum of Korea, the highlight was the uigwe (books that describe protocols for royal ceremonies of the Joseon Dynasty). What about this year?

It has to be the celadon.

Starting Oct. 16, we will hold an exhibition titled “The Best under Heaven, the Celadons of Korea.”

But there haven’t really been large-scale exhibitions on high-quality Korean celadons for a long time ? the last such exhibition at the National Museum of Korea was in 1986.

For researchers, there have been a lot of disputes over celadons ? especially about their origins. So the upcoming exhibition will be an opportunity to showcase their latest findings and hopefully reach an agreement.

For the general public, many are already aware of certain aspects of celadons, like the shapes and colors. But their knowledge of celadons is rather vague. And opportunities to examine them closely have been rare. 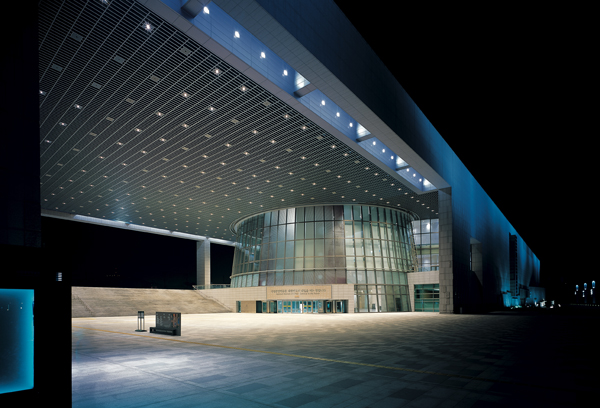 The National Museum of Korea Provided by the museum


What is your favorite spot in the National Museum of Korea? And do you have any suggestions for visitors browsing through the museum?

The room that houses Bangasayusang is my favorite place the museum.

It is because there is a reproduction of the statue made by sculptor Lee Jong-gak that is in my house. It’s smaller than the original. But it has been in my house for as long as I can remember. So I grew up looking at it.

So being in that room of the museum feels like home to me. I think that’s why I like it. I have looked at it at home my whole life and also at the museum, but I see something new every time. I just never get tired of it.

A good relic, in my opinion, is some thing that is good to look at all the time.

In fact, I think the big difference between Korean art and Western art is that with Korean art, people’s appreciation comes a tad later. In other words, you look at a piece for some time, and then you say, “Ah-ha.”

Getting foreign tourists ? especially those who stay in the country for a short time ? is a challenge, mainly because of our location [which is a little far from downtown]. And also it is pretty large, so tourists often don’t know where to go. But we have come up with 20 different courses for those who have only about an hour to spend in the museum. Visitors can find out about them at the information desks.