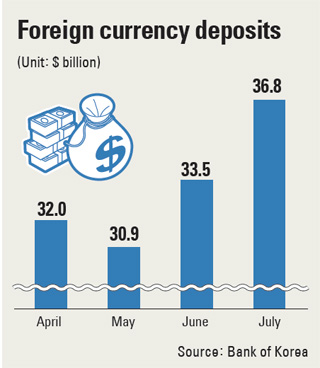 Foreign currency deposits at commercial banks hit a record high for the second straight month in July due in part to the ongoing trade surplus.

The figure may keep climbing as the government’s campaign of encouraging individuals to bank their savings in foreign currencies has not yet taken full effect, analysts say.

According to the Bank of Korea yesterday, foreign currency deposits in July amounted to $36.7 billion, smashing the previous record set in June of $33.5 billion. This also marked the largest monthly increase since September 2010, when $3.7 billion was added on-month.

Such deposits held by companies expanded 10 percent from June to $33.2 billion. These account for more than 90 percent of banks’ total foreign currency deposits.

The nation’s trade surplus was slashed by close to 50 percent last month, when it dropped to $2.8 billion from $4.9 billion in June.

This was largely caused by a sharp drop in outbound shipments, which were in turn affected by contracting global economic growth fueled by lingering fears of the malaise in the euro zone.

However, as Asia’s fourth-largest economy continued to post a trade surplus for the sixth consecutive month, companies were able to stash their earnings at banks.

Meanwhile, the government’s attempts to encourage individuals to increase their foreign currency deposits have again proven disappointing, as these only inched up 4 percent from the previous month to $3.6 billion.

Seoul in May made numerous overtures to expand holdings of foreign currency. The goal was to stockpile enough dollars, Chinese renminbi and other currencies to guard against unexpected turns of events amid a volatile financial market, including a mass exodus of foreign investors.

This trend was first witnessed in the late 1990s, when Korea’s first financial crisis left the nation near ruins. It reared its head again in 2008, when the global economy collapsed after Lehman Brothers went bankrupt. The financial market was challenged again last year when the euro zone crisis bubbled up, and it remains vulnerable to continued instability emanating from Europe.

As a result, the government has begun lowering the taxes it imposes on banks, one of a slew of incentives aimed at helping them attract retail investors to subscribe to foreign currency deposits.

Even retail investors are eligible for tax benefits when opening such accounts.

At present, individual account holders make up just 2.3 percent of total bank deposits in other currencies. The government hopes to raise this to 10 percent.

U.S. dollars were the currency of choice as of last month, accounting for 84 percent of all non-Korean won deposits. Euro-denominated accounts made up 7 percent of the total, and the Japanese yen 5 percent.

Deposits made in greenbacks grew more than 10 percent on-month to $30.9 billion, while those in Japanese yen added 2 percent to $2 billion. Euros slipped in popularity, dipping 0.4 percent, or $10 million, to $2.7 billion.