From Ob-gyn to transgender rock singer

From Ob-gyn to transgender rock singer 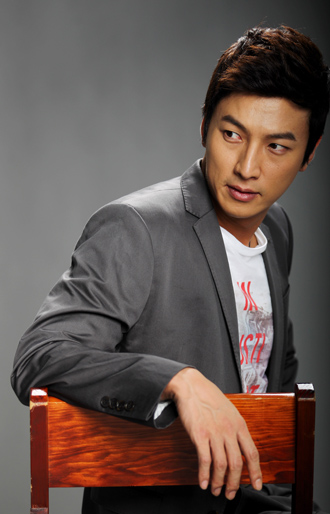 After finishing a drama series in which he played a devoted bachelor, Park Geon-hyeong goes back to his roots - musicals - this time as a transgender rock singer. “I want people to believe that I am a woman so that they can fall in love with me,” the actor said. [JoongAng Ilbo]

Park Geon-hyeong has played a wide range of roles throughout his acting career. His most recent character in “I Do, I Do,” Cho Eun-sung, is a devoted bachelor and Ob-gyn who falls in love with a pregnant woman. Now Park is acting in live performances in the musical “Hedwig and the Angry Inch,” in which he plays a transgender rock singer.

The 34-year-old recently wrapped up the MBC drama “I Do, I Do” last month and says his role in “Hedwig” is a significant challenge. But as the stage is “where he comes from,” the role is also fulfilling.

Park first debuted as a musical actor back in 2001 and has since been active on both television and stage. He has starred in the KBS2 dramas “The Kingdom of the Winds” (2008) and “When Spring Comes” as well as the JTBC program “Syndrome” (2012).

The actor sat down with Ilgan Sports, a daily affiliated with the JoongAng Ilbo, to discuss his current work in the musical and his various roles in dramas. The following are excerpts from the interview.

Q. You start your musical performance on Saturday without any rest after the drama series. How were you able to transition so quickly from television to the live performance?

A. Even now I just came from my practice session. People around me worry that the work may be too demanding, but I actually have a lot of energy and this production is very meaningful to me. For the first time in my life, I am going to wear women’s clothing by taking on the role of a transgender rock singer Hedwig.

How does it feel to dress like a woman?

As soon as I chose to take on the role of Hedwig, I wore a skirt. “Oh my, is this really how it feels to wear a skirt? It feels so empty underneath!” I also tried on a bra, and I think that women are amazing for wearing something so inconvenient all day long. In the end, I felt like my broad shoulders were not “woman-like” and that was when I felt like trimming some of my bones. I wanted to be a truly magnificent woman. I now understand why women say that they want to trim off their bones [Laughs].

I’ve heard that while working on “Hedwig,” you have set a special goal for yourself.

I want the people who come to the show but don’t know me to truly believe that I am a woman so that they can fall in love with me. This musical is both a great challenge and a pleasure, and this is why I decided to become an actor.

Isn’t it hard to go from TV to the musical stage and vice versa?

There is a lot to fight for. When I am doing a drama, I need to reduce some of the musical-like showy energy because otherwise, it looks too heavy on TV. It is important to stay on the same level as the other person. On the contrary, on the musical stage, it is necessary to give off a peculiar kind of energy. It is indeed not an easy job to move back and forth, but I am happy.

It’s hard not to mention your recent project, “I Do, I Do.” The character of Cho Eun-sung is hard to understand in real life because he loves a woman who is pregnant with another man’s child, and later on, he wants to become a godfather-like figure for the newborn.

I thought a lot about the character while taking on this role, such as thinking about what love really is, at exactly what point does a man feel love toward a woman, and why a man and a woman still love each other even after incessant fighting. I think the character is not unrealistic, but just rare, and I wanted to show that kind of standpoint.

But what if this kind of situation happened in real life?

In a strictly standardized moral sense, there would be no explanation for that. People close by would ask questions like, “Are there really no other woman at all? Why does it have to be that woman?” But when you think about it, the only possible answer would be that it is because of that woman.

What I learnt throughout this role is, “To all the men out there, don’t think that you know everything about women.” I think that women are people who are in constant transformation and that with each transformation, something improves. Things like navigation need to be changed and upgraded once a year, but it seems like women change every three minutes, so how are we to possibly stick to their pace? Men shouldn’t be so bigheaded about knowing women.

Are you currently seeing anyone?

No. When I am in love with someone, I’m not the kind who plays “hard to get.” Rather, I am totally at their disposition, which is probably why the other person loses the will to play any tricks on me.

Like your previous project with JTBC’s “Syndrome,” you once again took on the role of a doctor in “I Do, I Do.”

“Syndrome” was a drama that was wholly focused on medical science, but since “I Do, I Do” was a drama in the genre of a romantic comedy, it was very different. When I received the script, I was like, “Wow, is this really for me?” and I really liked the concept of my character. Besides, isn’t it a compliment to hear that I look good as a doctor? Also, because of “Syndrome,” wearing scrubs wasn’t awkward at all, but actually very comfy. I was happy to not have to take on the role of a doctor who had to perform endless surgeries that were of life or death situations, but rather playing a doctor whose duty was to bring joy into welcoming a new life.

You seem to be an eager perfectionist.

That is a necessary trait to have for an actor. I constantly think about how much more I can present myself sincerely to the audience because at the end of the day, I am to become a gift for them.