Frenzy to stay cool as ACs sell out

Frenzy to stay cool as ACs sell out 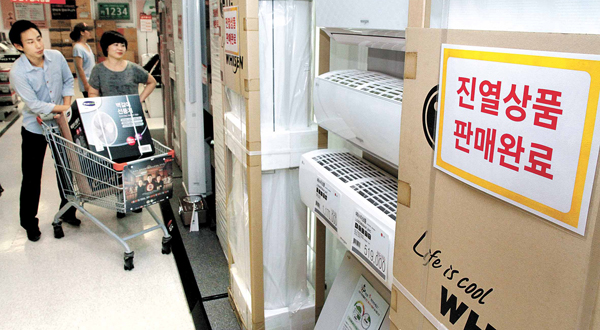 A “sold out” sign is attached to standing air conditioner models at E-Mart’s store in Eunpyeong District, northern Seoul, on Monday as inventory ran low in the wake of a heat wave that caused demand to spike. By Suh Kye-ho


Sweat-drenched customers crowded a Hi-Mart store in Songpa District, southeastern Seoul, on Friday night just before closing time as they pored over air conditioners and wrestled with the decision of which one to buy.

“I wouldn’t normally consider getting an air-con unit because they’re expensive, and the electricity bills will be a burden,” said a homemaker in her 30s. “But unlike last year, the heat this year is really unbearable.”

Outside the building, Hi-Mart employees were busy taking air conditioners off a truck.

One said most of the units had already been pre-sold and that their inventory was running low.

Sales of air conditioners and fans have spiked in recent weeks as a record-setting heat wave has engulfed the nation, leaving urbanites sleepless in Seoul as so-called “tropical nights” keep them up at night.

This comes in stark contrast to the situation in June, when sales of ACs dipped due to the economic slowdown and an unusual rainy spell.

According to industry sources yesterday, sales of ACs at E-Mart last month jumped 25 percent on-year, but sales between July 20 and July 31 surged 240 percent compared to the same period last year.

Lotte Mart also saw a 27 percent sales increase last month compared to the same period last year, while seeing a 260 percent rise between July 25 and July 31 from a year earlier. 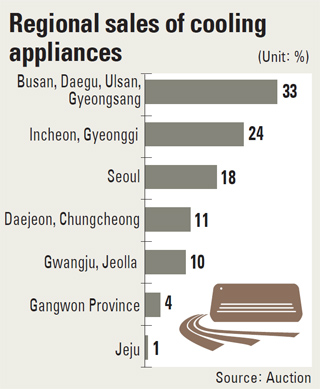 Samsung Electronics said its AC sales in the fourth week of July quadrupled from a week earlier, while LG Electronics saw sales triple over the same period. The sudden surge in demand has caused a shortage of products at major home appliance retailers and department stores.

“Consumers have to wait a week on average for their new air conditioners to be installed,” said an employee at Hi-Mart.

A Samsung Electronics employee said many of the company’s customers have to wait longer, up to 10 days, as “supply cannot keep pace with the growing demand.” LG said it is struggling to find enough manpower to install the units in a timely manner.

However, with weather forecasters warning that the mercury could climb even higher, manufacturers and distributors of ACs expect the sales to continue through August.

“AC sales usually peak from April to June then gradually begin to slowdown in July. August would be considered the off-season,” said a staffer at Hi-Mart. “But the unusual heat wave this July gave our sales a second wind.”

Sales were exceptionally high in certain regions prone to heat, including Busan, Daegu and North Gyeongsang, where daily temperatures can easily shoot past 30 degrees Celsius (86 degrees Fahrenheit) in summer.

Hi-Mart cited the London Olympics as another factor that contributed to the booming demand for ACs as people stay up through the night to catch the action live.

Other seasonal products such as fans, cooling mats and portable mini ACs are also flying off shelves as home shopping channels and Internet auction sites drive down prices.