Modesty a virtue for family-run businesses

Modesty a virtue for family-run businesses 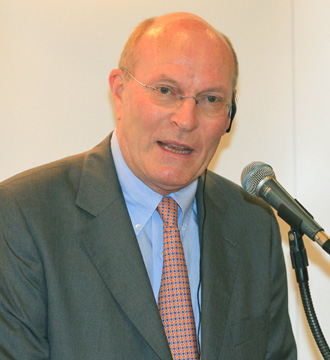 Frank Stangenberg-Haverkamp, who married into the 11th generation of the Merck family, was surprised to learn of Korean conglomerates’ circular shareholding structure, a political hot potato that gives owners more power to control their respective groups.

“I heard lots of criticisms about Korean conglomerates. That wouldn’t work under the German legal system,” the 64-year-old said in an interview with the Korea JoongAng Daily yesterday.

Stangenberg-Haverkamp is the chairman of the Board of Partners, a supervisory board for Merck that is tasked with giving advice on strategies for personnel and financial management of the company.

The Germany-based Merck is a family-owned pharmaceutical and chemicals manufacturer with the longest history in the world. It began as Engel Apotheke, a local pharmacy in Darmstadt, southern Frankfurt, in 1668.

“There is a different culture behind it, because in Germany, companies like Merck invest only in their fields of interest,” he said. “Korean conglomerates will have to find their own way to develop in the future. One of the secrets of European companies is that they pay their taxes, get the best people they can, and employ non-family members.”

Merck has seen no scandals involving money taken from corporate coffers over the last three centuries, Stangenberg-Haverkamp said. Under the tax law, family-run businesses can also avoid paying inheritance tax by employing a certain quota of people and paying them a stipulated minimum salary, he added. Inheritance tax is usually incurred when corporate shares are passed down from one generation to the next.

According to tradition at Merck, 70 percent of the group’s shares are divided among 130 family members, at a rate of up to 5 percent per person. The remainder is held by institutional investors in the United States and Britain. This keeps at bay the prospect of a single largest shareholder exercising undue influence on the company, he said.

“Merck’s children are educated to be modest. None of my children had a car when they were at university. I told them to work if they want to own [one],” he said.

He said that a family-run business can also focus more on long-term goals, adding that if Merck had constantly prioritized quarterly profit, as U.S. companies tend to do, it wouldn’t have been able to maintain growth over 13 generations. Stangenberg-Haverkamp revealed five secrets for a family company to live long and prosper.

“Our top priority is to put the company’s interests before those of the family, and to put all of our money back into the company,” he said.

Although Merck is a huge global company that runs 185 affiliates in 67 countries, it doesn’t own any private jets and prefers a more low-key approach, he added. He said business-owning families should not try to do everything themselves, but must learn how to delegate to outsiders.

“Don’t give preference to family members, and those members who do want to join the company must prove they are capable,” the chairman said, adding that they must be strictly qualified. At Merck, Stangenberg-Haverkamp is joined by one other family member.

As is the case in most families, conflicts arise and need to be resolved, but there has been nothing of sufficient magnitude to put the company’s well-being at risk, he said.

“The key is to have the right governing structure to avoid serious conflicts,” he said, adding that this laid a stable foundation on which the group was able to flourish. The drug maker was even able to escape the brunt of the euro zone crisis this year, as its revenue has grown 8 percent in the first half from the same period last year. For the whole of 2011, it posted earnings of 10.3 billion euros ($12.8 billion).

Stangenberg-Haverkamp dismissed rumors that Merck is undergoing an organizational restructuring in the wake of the debt crisis in Europe. He said the company plans to boost efficiency and streamline its decision-making process for further growth as its 350th anniversary arrives in 2018.

For the next 10 years, the Merck family wants to foster organic light-emitting diodes as a new growth engine, while keeping its competitive edge in LCD technology. In Korea, a market where the company relies 95 percent of its profits on its chemicals unit, Merck wants to expand its pharmaceutical business and focus more on screening and therapies for cancer patients.