The weather is now a business factor

The weather is now a business factor 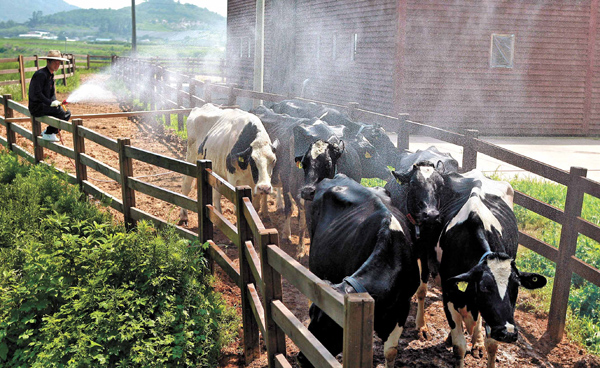 This photo taken on Aug. 1 shows a farmer at Maeil Dairies cooling down cows at the Sangha Organic Farm located in Gochang County, North Jeolla. The cows’ milk production has decreased by 20 percent over the last 10 days due to the heat wave. Provided by the company

The unprecedented heat wave is affecting companies in many ways. Industries that have manual laborers such as shipbuilding and iron ore have to adjust work schedules because of the heat, such as extending lunch hours. Changes in weather patterns require even more attention. In the clothing industry, for example, seasonal fashion schedules may change completely.

In fact, “weather risk management,” is now an established concept in executive suites, especially with more and more evidence of long-term climate change.

After studying damage incurred from weather risk management in the United States in 2009, the Kmipa concluded that its damages amounted to 10 percent of GDP, Park said.

Paul Krugman, the Nobel Prize laureate in economics, wrote in a July 24 column in the New York Times that “the costs of climate change aren’t a distant prospect, decades in the future. On the contrary, they’re already here.”

On Aug. 1, 35 cows at the Sangha Organic Farm located in Gochang County, North Jeolla, were clearly exhausted from the heat, which went over 36 degrees Celsius (97 degrees Fahrenheit). They were unwilling to move out of their barn.

According to Maeil Dairies, which runs the farm, the output of milk per cow has declined from 25 liters a day to 20 over the past 10 days.

“We run 14 air ventilators inside the barn and provide cows iced water five to six times a day, but they aren’t eating well as they are particularly sensitive to heat,” said Lee Jae-Soon, a manager at the farm.

Kolon has discontinued its production of trench coats since the spring of 2010.

The fashion house previously produced three to four different types of trench coats annually as a standard item to wear between winter and summer. But changes in the climate - longer winters, shorter springs - made the item unpopular.

And when the weather is unpredictable, shipping out seasonal styles can’t be done like clockwork as it was in the past.

“In the past, we planned clothing production six months ahead,” said Lee Dong-hyun, a manager at Kolon’s planning team. “Nowadays we get daily and weekly inventories according to the current weather trends.”

Extreme weather such as severe drought, floods and hurricanes affect the procurement of raw materials and outlets.

The most susceptible sectors are shipping and aviation, market observers said.

Hanjin Shipping has contracts with two weather information service companies that give it weather forecasts and recommended routes.

After Asiana Airlines established a comprehensive control center, it managed to reduce the number of cancellations due to storms or other unfavorable weather conditions.

With wheat and corn prices soaring lately, a priority for food manufacturers is to prevent further costs occurred by climate changes.

CJ CheilJedang hired a meteorology major for the firm’s grain purchasing team last year. He helps make decisions on the timing and volume of purchases after analyzing research results provided by the U.S. Department of Agriculture and American farmers.

DongA One Corporation, a flour mills and feed company, said it watches the weather obsessively. For example, it already acquired sufficient volumes of wheat flour for the domestic market before “agflation” kicked in because of droughts affecting world wheat supplies.

The company receives a three to four month weather forecast for the American continent from foreign weather information providers.

Last may, it received information that droughts would be aggravated in the U.S.

“We predicted prices of flour would skyrocket and we bought a lot in advance,” said No Dong-hwan, a senior official at DongA One. “Our prediction turned out to be right.

Samsung Group has been charting out strategies tailored to climate forecasts ever since it launched Samsung Global Environment Research Center in the early 2000s.

“We first set detailed targets in preparation for climate change and then we break them into parts,” said a Samsung Group official. Weather forecasts acquired by the companies are widely adopted by the state-run Korea Meteorological Administration.

Although leading companies are undertaking weather risk management, the economy as a whole is still comparatively behind in the idea.

“More than half of American companies purchase weather information from private providers to hammer out their management plans, but only nine percent of Korean companies do this,” said Kim Dong-sik, CEO of a local private weather service provider, Kweather.