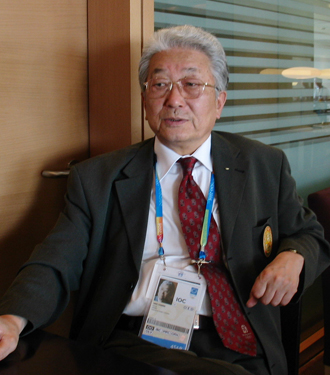 In the wake of an International Olympic Committee meeting, an angry voice echoed through the hallway of London’s Grosvenor Hotel on July 26.

That voice belonged to Chang Ung, the only North Korean member of the IOC. In fluent English, he criticized the organizers for a gaffe that occurred prior to the women’s football match between North Korea and Colombia, when the scoreboard showed the South Korean flag beside the North Korean players’ faces.

This caused the match to have a delayed start as the North refused to take to the field until the problem was rectified.

Chang had already raised the matter with IOC President Jacques Rogge, who called it a “simple human mistake” with “no political connotation,” but Chang was not easily pacified.

The former basketball player, who measures a towering 190 centimeters (six feet, three inches), continued venting his spleen over the matter at the Grosvenor as reporters from The Associated Press, Reuters and Japan’s NHK circled in search of a scoop, or at least some quote-worthy and incendiary remarks.

When asked whether he was satisfied that Locog, the organizing committee of the London Games, had apologized for the incident, he said, “They apologized to the national team. That’s enough.” However, he added that the IOC needs to work harder to avoid damaging its reputation through such errors, especially during the 302 medal-awarding ceremonies.

Chang has retained an aura of mystery over the years, but many of his colleagues at the IOC describe him as a sociable person who often engages in lighthearted jokes.

But information on his career and personal life remains sketchy at best. Born in Pyongyang in 1938, Chang played for the national basketball team for a decade. Kim Jong-un, the regime’s new leader, is also known to be a huge hoops fan.

In 1996, an Olympic year, Chang was appointed as the official North Korean member of the IOC, while South Korea’s Lee Kun-hee, the chairman of Samsung Electronics, was also invited to join the world body. IOC members who were appointed before 1999 can keep their position until they reach the age of 80.

Chang’s official business card lists his home address in Vienna, where he relocated after joining the IOC. Industry insiders often quote him as being North Korea’s source for European funding.

“Because Chang has lived abroad for close to 20 years, he is a trusted figure among North Korea’s government officials,” said Jeong Seung-jang, head researcher at the Sejong Institute.

Although little is known about Chang politically, he is quite active in the international sports arena. He is also known to be skilled in dealing with the media. During international sporting events, he is habitually surrounded by South Korean and Japanese reporters.

Earlier this year, he even sat in for an interview with Voice of America, during which he expressed his hope that North Korea’s female athletes would shine at the London Olympics. He joked that Pyongyang women are stronger, and are in many ways better, than their menfolk.

The first time this reporter met Chang was in July 2010, during the inaugural Youth Olympics in Singapore. Holding a copy of the International Herald Tribune, Chang was eating breakfast at a hotel with his wife, a former volleyball player, and his youngest son, Jeong-hyuk, 35, a former goalkeeper for the national football team.

As he put an omelet, salad and fruit on his plate, he greeted other IOC members at the breakfast buffet with a smile and kissed European members on both cheeks, while giving greetings in French.

When asked whether it was difficult to forge such close ties with other IOC members, he said this had taken some time. “It’s probably because I have been with the IOC for a long time, since 1996, and we’ve known each other for a long time,” he said. “My predecessor at the IOC didn’t speak English very well.”

On how he sees his role as North Korea’s representative at the IOC, he said, “Actually, I give a lot of suggestions and criticism. The IOC now is very Europe-centric, almost to the degree of being pathetic. The Asian members of the IOC should try to be stronger.”

Even though our conversation was cut short, Chang’s son Jeong-hyuk found time to approach me and wish me well in writing as many “good articles” as I could for the JoongAng Ilbo.

At the time, Jeong-hyuk said he was studying sport science at a school in Vienna, and that his dream was to return to the North and become a professor.

Chang, a key official in inter-Korean sports exchanges, was instrumental in having the two Koreas march together under one flag during the opening ceremony of the Sydney Olympics in 2000.

When Pyeongchang won the bid last year to host the 2018 Winter Olympics, Chang deflected questions about whether the Games would serve as a platform for more rapprochement, but added that he hoped they would.

While IOC regulations rule out the possibility of the two Koreas jointly hosting an edition of the Olympics, they can still march together during the curtain-raiser in Pyeongchang if the political and sporting will is there. And if so, Chang will again be at the heart of the matter and one of the figures pulling the strings as well as the bonds of friendship.