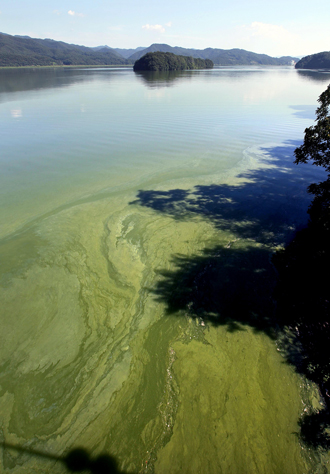 Massive algal blooms were spotted Sunday at Yangsuri in the northern Bukhan River, which yesterday were found to have floated into the Han River, the main water source for residents of Seoul. By Kim Do-hoon

Thanks to the prolonged heat and lack of rain, massive algal blooms have spread from the northern Bukhan River to reach the Han River in Seoul, threatening the safety of drinking water in the capital.

The Seoul Metropolitan Government surveyed Monday five drinking water intake stations near the Jamsil Underwater Weir in the Han River, and the water at three of the stations contained blue-green algae above the advisory level.

Because the water is filtered before going into the supply pipeline, geosmin in Seoul’s tap water was still below the advisory level, the city government said. It has received no complaints about tap water smelling bad.

Toxic algae blooms have also developed in the Nakdong River, from where Daegu takes its drinking water.

For Seoul and the Han, large clouds of algae first appeared at the Bukhan (North Han) River, located upstream of the Han, in late July. Algae grows in warm weather, with bright light, and in waters that aren’t disturbed by rain.

As temperatures continued to rise over the last week, the algal blooms spread to the Han River.

The city government yesterday said it secured 12 tons of powdered clay which it wants to spray on the blue-green algae to kill it. The city is waiting for the outcome of a National Institute of Environmental Research toxin test and a recommendation on the amount of special clay to be used in the operation.

Since the algal blooms were spotted in the Han, the city government began using powdered activated carbon at filtration facilities to produce odorless drinking water. Concerns, however, rose that the plants could run out of supply if the blooms spread further on the Han.

The city said it will have another round of water quality tests today. If the contamination continues, an algae advisory will be issued.

“Unless we have some rain or a large temperature drop, the advisory is expected to be issued around Friday,” a Seoul city government official said Monday.

Since 2000, five algae advisories have been issued in the section of the Han River that goes through Seoul. No advisory has been issued since July 2008.

The city is also preparing a manual for residents. If the advisory is issued, atopic dermatitis patients, the elderly and children will be advised to refrain from water sports, such as swimming, in the Han River. The city also said tap water should be boiled for more than three minutes at a temperature over 100 degrees Celsius (212 degrees Fahrenheit) to rid drinking water of the smell of geosmin.

The Seoul Metropolitan Office of Education said yesterday it will postpone the children’s cross-river swimming festival, scheduled for today, indefinitely. For the Bukhan River and upper stream of Paldang Dam, where the algal blooms were first spotted, an advisory was issued on July 27 and has not been lifted.

According to the Ministry of Environment, the amounts of geosmin in the Bukhan River continue to remain at alarming levels. The ministry conducted surveys of the water at four spots Saturday, and the outcomes showed high levels of the agent.

The water collected near Cheongpyeong, Gyeonggi, contained 1,567 parts per trillion (ppt) of geosmin, the highest in the survey. The safe limit of geosmin in drinking water is 20 ppt.

The amount of geosmin at the Paldang Intake Station, the main water source for the 25 million people in the capital region, went up this month. The ministry, however, said the amount in tap water after filtration is below the standard of 20 ppt, with the exception of water treated at the Ilsan Filtration Plant.

The ministry said the algal blooms will remain in the Bukhan River for a while because of the continuing heat wave and the lack of rain. According to the ministry, the amount of recent precipitation in Chuncheon, Gangwon, located on the upper stream of the river, was only 58 percent of the average of the past three years. The city’s average temperature for July and August was 2.5 degrees Celsius higher than that of last year.

While the level of geosmin remains high, no toxins from algae were found in the Bukhan River, the ministry said.

Toxic algae blooms, however, spread along the midstream of the Nakdong River, from where Daegu takes its drinking water. Surveys at the river found microcystin, a toxin produced by blue-green algae. It is known to cause serious liver damage.

The Daegu Metropolitan Government said it is conducting water quality surveys everyday to ensure the safety of the drinking water. The city said its reinforced filtration process is designed to remove all toxins from algae blooms.

The Environment Ministry and other experts said the filtration removes toxins produced by algae.

Environmental groups and the public, however, expressed skepticism, and President Lee Myung-bak discussed the issue at a cabinet meeting yesterday morning.

“This is an unavoidable natural phenomenon caused by climate change and a long drought and heat wave,” Lee was quoted as saying by Blue House spokesman Park Jeong-ha. “But the people are very concerned about it, so the government must do its best to manage water safety and public health. We should also provide accurate information more actively.”

While some environmental groups criticized the Lee administration’s four-rivers restoration project for the algae, Park said the development programs have nothing to do with it. He said the Bukhan River was not even a part of the project.

“It is inappropriate to mislead the public with such an argument,” he said.