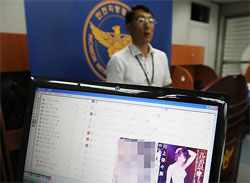 Police yesterday busted the nation’s largest known distribution ring of online pornography, allegedly involving a university professor and another man in his 70s.

The arrest comes as police cracked down on online distributors of sex videos and other pornography in the wake of a number of brutal sexual offenses against women and children.

The suspects set up an exclusive group on a local Web-based hard drive backup service to share sexually explicit files, the police said. The service had around 10,000 members and a million hits, they added. The members allegedly had to pay around 1,000 won to download each gigabyte of files.

Twelve others, including a university professor, were also booked without detention for allegedly posting around 160,000 items of pornography on the Web site, for payment, the police said. The uploaders allegedly received cash ranging from 30,000 won to 10 million won and free coupons from the Web site operators.

The police said they plan to expand the investigation to determine whether any sex videos featuring minors were among the materials distributed by the ring.

The crackdown comes after a 10-year-old girl was killed by a convicted sex offender who allegedly owned almost 70 items of child pornography. Police suspect the girl was also raped.