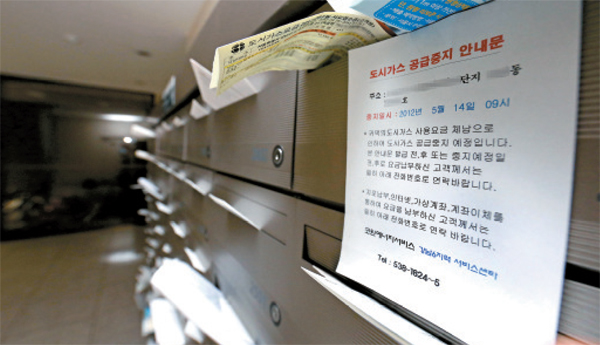 A notice of suspension of gas service is pasted on a mailbox at a luxury apartment complex in Yeoksam-dong, Gangnam District, southern Seoul, on Monday. The number of “house poor” Koreans is on the rise. By Ahn Seong-sik


A message was posted on the management office bulletin board in a luxury apartment complex in Yeoksam-dong, southern Seoul, on Monday. It read:

“The nonpayment of apartment management fees has increased sharply so action against delinquent residents will be taken.”

“I’ve lived in Gangnam for a long time,” said one resident, an executive of a large corporation, “and that’s the first time I’ve seen that kind of notice.”

In the same lobby, a notice of suspension of gas supply was taped to one mailbox stuffed with bills.

As the global economy cools, the biggest impact in Korea is on households who borrowed too much money, either to buy an apartment or house or by using their credit cards too much. That has led to a large number of people who are “house poor” - whose wealth is tied up in real estate and who don’t have the cash for monthly or daily necessities.

These include people who own posh high-rise pads in wealthy neighborhoods who can’t even pay the utility bills.

And with the real estate market in the permanent doldrums, many people can’t sell the apartments or houses at a profitable level - or even find a buyer to sell at a loss.

According to the Korea Electric Power Corporation on Monday, unpaid electricity bills for this year as of June were 69.7 billion won ($61.8 million), 23.3 percent higher than for all of 2011. This is the highest amount since the global financial crisis of 2008. 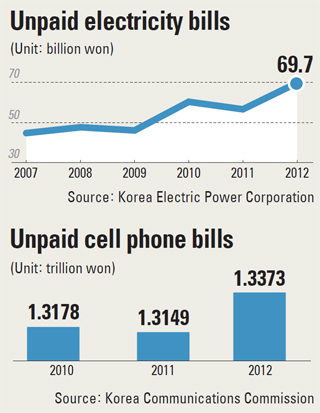 Of all the apartments taken over by creditors and put up for auction in Seoul in the first half of the year, 46.7 percent were because the owner couldn’t pay monthly management fees and utilities, according to real estate company Digital Taein.

One 100 million won apartment was put up for auction because its owner couldn’t pay a few million won in management fees.

“In order to pay off their credit card debt, some people put their houses up for sale,” said Ha Yun-jong, a researcher at GG Auction. “And when they fail to find a buyer, they can’t make the mortgage payments and the houses get put up for auction.”

“There’s a whole strata of people in debt that even financial authorities cannot conceive of,” said Democratic United Party Representative Jun Byung Hun, “and it’s especially worrisome that recently there has been a sharp increase in people who can’t pay day-to-day bills.”

One down-on-his-luck apartment owner had the bank take over his 98-square-meter (1,055-square-foot) apartment in Mok-dong, an upper-class neighborhood in southwestern Seoul, with an appraised value of 110 million won. He walked away with 8.8 million won.

In the first half of this year, there were 328 cases of card companies confiscating property - and even houses - and auctioning them off. There were 553 cases for all of 2011.

According to the Korea Development Institute, 63 percent of households nationwide are in debt and a third of those households are making less than they spend.

In a survey by the Bank of Korea of 74 finance experts, over half stated that there is a high likelihood of the household debt problem resulting in systematic risk to the Korean financial system within three years.