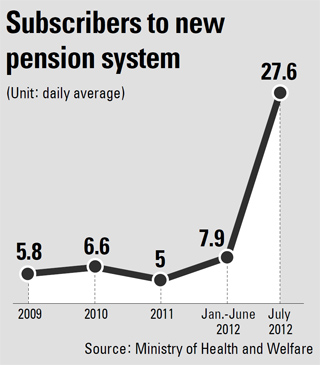 A full-time homemaker surnamed Lee, 52, said she plans on paying more than 4.9 million won ($4,341) this month into her national pension.

The amount is a significant increase when comparing it to previous months when she paid only 89,100 won every month. Why did it suddenly jump?

“I became worried about my future when I learned that my husband would only be receiving 1.2 million won in monthly pension payments after he retires,” Lee said.

She recently discovered that she’s able to pay five years worth of premiums all at once in advance and receive a steady pension after she turns 62.

She said the pre-pay system is efficient in that she is able to financially secure her golden years at a time when she can afford to pay into the system.

“Instead of saving the family’s monthly income, which would in the end all be spent on our children’s schooling or daily expenses, I thought it would be smarter to put a portion of it into my pension,” she said. “It would help support me and my husband after retirement.”

In Korea, people pay into a national pension system that serves a similar role as Social Security in the United States. They pay monthly premiums - assessed based on various factors including income, assets and overall net worth - over the course of 10 years to qualify. After qualifying, a retiree is guaranteed pension payments from age 62 until the end of his or her life.

Starting in July, the government introduced the advanced payment system for pension subscribers over the age of 50 to allow them to prepare for their lives after retirement.

Before the system was introduced, pension subscribers were only allowed to pay an additional year of pension payments in advance.

Also, considering that a subscriber must pay monthly pension premiums for at least 10 years to receive the payments after retirement, the new system the government introduced would help them pay a lump sum of the total they need to pay to receive government assistance.

As for Lee, after she pays five years worth of premiums, and if she pays a monthly fee for an additional five years, she will be able to receive 160,000 won a month after she turns 62.

Lee isn’t the only one making use of the new system.

According to the Ministry of Health and Welfare yesterday, a total of 552 subscribers of the national pension service said that they will pay insurance fees in advance last month.

On a daily average, 27.6 subscribers chose the prepayment system, which is five times more than in July, last year. Of the 552 subscribers, 175 said they will pay 5 years worth of premiums in a lump sum.

A 52-year-old surnamed Kim, who retired from work four years ago, also decided to pay 30 months worth of premiums in advance, which would give him more financial security in the future.

He has only been paying pension fees for seven years and five months, which is shorter than the minimum 10-year period, so he decided to pay 30 months of premiums all at once right now when he can afford to pay with his retirement allowance he received.

“With the retirement pay I received from my company, I decided to pay my pension fee in advance,” Kim said.