Taxis clog the streets to hold out for longer rides

Taxis clog the streets to hold out for longer rides 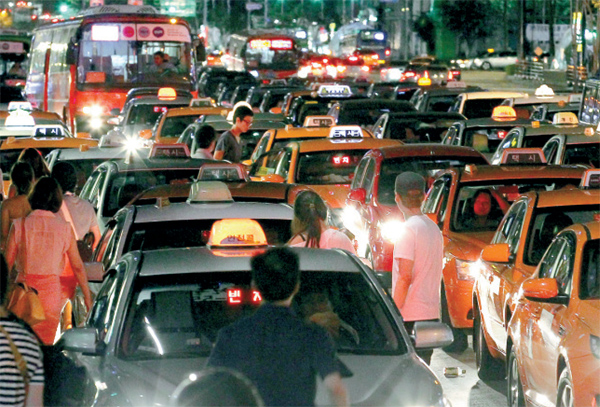 Citizens walk into the road to hail a taxi near Gangnam Station, southern Seoul, after midnight on Saturday. Many taxis are only taking passengers who want to travel to the Gyeonggi area, outside of Seoul. By Kim Do-hoon


After midnight on Saturday near exit No. 10 of Gangnam Station, southern Seoul, about 40 taxis parked along the side of the street, turned on their “off duty” lights and the drivers disappeared.

The line of taxis stretched about 400 meters (1,312 feet), from the subway station to the Kyobo Tower building. In about 10 to 15 minutes, a lane of the crowded Gangnam Boulevard was filled with empty, driverless taxis.

The drivers sat on nearby benches and under trees and smoked cigarettes to kill time.

“Anyone going to Gyeonggi?” one called.

A tout who seemed to be in his 50s blew a whistle and started attracting passengers.

A JoongAng Ilbo reporter approached him and asked to be taken to City Hall in Jung District, central Seoul.

“None of these taxis go to places in Seoul,” the tout said.

The taxi’s license plate was registered as a Seoul vehicle but he still refused to take the reporter.

“Can’t you see that there is no driver in that vehicle?” he said angrily.

In about five minutes, however, the tout brought the driver of the taxi from an alley when a passenger willing to go to Suwon, in Gyeonggi, asked for a ride.

At 11:30 p.m. on the same day, a lane next to Sadang Station, in Dongak District, southern Seoul, was also occupied by about 20 to 30 taxis. The line of taxis stretched down to the nearby bus stop, about 200 meters.

The drivers were out on the streets trying to attract passengers who wanted to go to Suwon and Anyang in Gyeonggi. A woman got into one of the taxis, but was kicked out immediately.

“The damn driver told me to get out of the taxi because I wanted to go to Gangnam,” the woman said.

Most of the taxis parked around the station were Seoul taxis, but none of them would take her.

When the clock struck midnight, the parking control team dispatched by the Seoul Metropolitan Government appeared. The drivers quickly moved their vehicles from the site. But some aggressive drivers started yelling at the officials.

“They’re like a swarm of flies,” Park Seong-hak, an official from the traffic control division of the city government told the JoongAng Ilbo.

“Though we force the parked taxis to move, they come back after we leave the site.”

As the taxi lines stretch down to the bus stops, which are along sidewalks and next to the pedestrian medians, many buses, including intra-city and express buses abruptly stopped in the middle of the road to load and unload passengers.

“The streets of Gangnam become a giant parking lot after midnight because of the damn taxis that never move,” a 55-year-old passenger surnamed Jeong told the JoongAng Ilbo.

“I don’t understand why the police and local district officers are neglecting this situation because it certainly threatens many people’s lives. I’m trying to go to Isu Station on line No. 7, but I wasn’t able to get one for more than an hour.”

The municipal government is getting tons of complaint calls from Seoul residents every day, but they have only exposed 209 violators who were caught for illegal touting, not for parking.