A proper house for parents who raised a champ

A proper house for parents who raised a champ 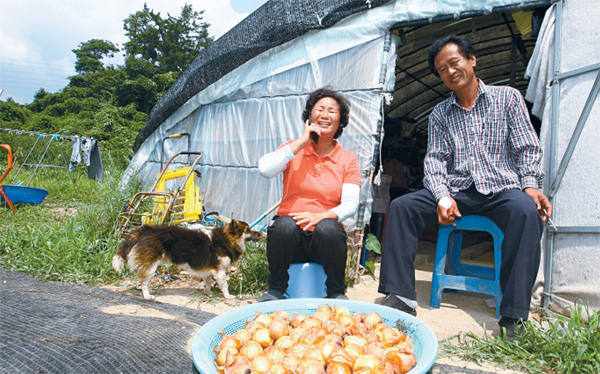 The parents of Yang Hak-seon, who won Korea’s first Olympic gold medal in gymnastics, receive a congratulatory call on Tuesday in front of the vinyl greenhouse where the family lives in Gochang, North Jeolla. By Oh Jong-chan


GOCHANG, North Jeolla - 19-year-old gymnast Yang Hak-seon made two promises to his parents before he left Korea for the 2012 London Olympics: He said he’d return home with a gold medal and buy a new house for his family.

On Monday Korea Standard Time, Yang kept the first promise by winning Korea’s first-ever Olympic gold medal in gymnastics by scoring an average of 16.533 points in two vault events. Korea has competed in both men’s and women’s gymnastics events since the 1960 Olympics in Rome, but had settled for four silver medals and four bronzes, all in men’s events.

The new house is bound to be an improvement over how the Yangs are living now. When the JoongAng Ilbo first requested an interview with Yang’s parents, they turned it down because they were embarrassed to show how they live, “although Hak-seon told us not to be ashamed of being poor,” Ki Sook-hyang, 45, his mother, said.

When they finally relented, the JoongAng Ilbo reporters met Yang’s parents at their abode: a vinyl greenhouse formerly used to dry crops such as chilies. They have remodeled it for use as a house. A tarpaulin has been thrown over the top to block the sun. An air-conditioner purchased five days before is installed inside the house but not properly adjusted yet. The reporters started sweating profusely after a few minutes.

The long shed is divided into three sections: a kitchen area, sleeping rooms and a kind of living room-storage area. A wall of the living room contains dozens of medals and awards Hak-seon has won. Hak-seon has an older brother who works with his parents.

Yang’s family settled in Namdong Village, North Jeolla, last March after his father was injured working as a plasterer at a construction site in Gwangju. They now grow chili and beans.

Hak-seon is paid a 1.2 million won ($1,060) monthly training subsidy by the Korea Gymnastic Association, and he wires most of it to his parents.

His mother said that she had a prescient dream a day before her son won the gold. “In the dream, Hak-seon gave medals to two of his competitors but told them, ‘Sorry, the gold is mine,’?” Ki recalls. “Then he put the gold in his pocket.”

Yang Gwan-gweon, 55, Hak-seon’s father, said he always feels sorry for his son because he wasn’t able to spend much time with him as a boy due to his work. “He really didn’t like staying at home alone,” Yang said. “That’s how he started gymnastics when he was a third grader. Athletes should eat meat and good food, but I wasn’t always able to provide them.”

Yang will be rewarded well for his Olympic achievement. The Korean Olympic Committee will give him 60 million won, and the Korea Gymnastic Association will give 100 million won. The SM Group, a construction conglomerate, is giving Yang and his family a 32-pyeong (1,140.9-square-foot) apartment, worth about 200 million won, in Gwangju.

And the Nongshim Group, Korea’s No. 1 ramen producer, has promised the family a lifetime supply of its Neoguri instant noodles, starting with 100 boxes. During an interview with the media following her son’s triumph in London, Yang’s mother sent a long-distance message to her son: “I’ll cook you Neoguri noodles when you come back home,” she promised.