Kim has a hold on gold, ends wrestling’s drought

Kim has a hold on gold, ends wrestling’s drought 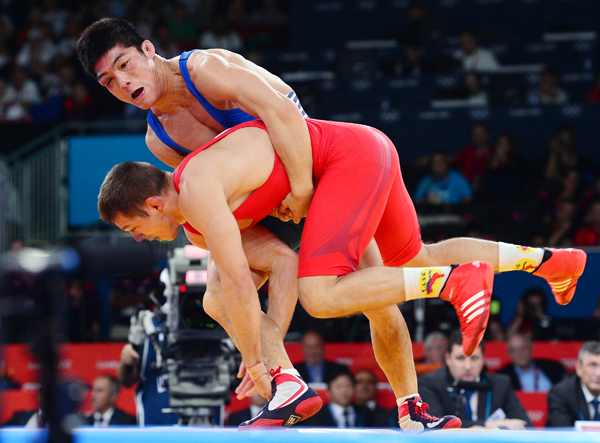 
Some people think the winner is sometimes determined by factors other than the grit and sweat of hard work.

Wrestler Kim Hyeon-woo is not one of them. He trained more than 10 hours a day since joining the Korean national wrestling team in 2010. Before the 2012 Summer Games, he said anybody who had sweated more than him deserved a gold medal.

But it was the 23-year-old Korean with a swollen eye reminiscent of “Rocky” who stood atop the podium at ExCeL North Arena in London early yesterday morning Korea Standard Time. Kim beat Tamas Lorincz of Hungary to win the men’s 66-kilogram Greco-Roman final round earlier the day, Korea’s first Olympic gold medal in wrestling in eight years.

“There has never been a moment that I didn’t think it was hard preparing for this Olympics. I am proud to have endured all the training,” Kim said after the final match. “I approached the training like it was a matter of life and death. I wanted to move heaven.”

His gold medal surely moved his coaches, who came to London resolved to reverse Korea’s waning dominance in a sport that was once one of the country’s strengths.

Since Yang Jung-mo won Korea’s first-ever Olympic gold medal at the Montreal Olympics in 1976, wrestling had produced at least one gold medal at each Olympiad through the 2004 Athens Games.

At Beijing in 2008, however, wrestlers managed to win only one bronze medal. It was the beginning of a gold drought for Korean wrestlers that extended through the 2010 Asian Games in Guangzhou, China, and three consecutive World Championships starting in 2009.

“Hyeon-woo has saved Korea’s wrestling. I thank him for that,” said Park Jang-soon, coach of the Samsung Life Insurance wrestling team where Kim belonged before joining the national team.

Kim thanked his coaches for helping him focus on training. After winning the final bout, he embraced national wrestling coach Bang Dae-doo. He also made a deep bow to the national flag at the center of the arena to express his gratitude at being able to represent the country in the sport he loves.

“Wrestling is all of my life,” Kim said. “I thought my life would change because of this.”

Kim started his career in sports as a judoka during elementary school in his hometown of Wonju, Gangwon. But he bloomed as an athlete after shifting to wrestling to in middle school in 2001.

He then went through a slump and was knocked out in the second round at the Guangzhou Asian Games in 2010. By last year he was regaining his winning form, taking a bronze medal in the World Championships. He also won the London pre-Olympics competition in February.

Kim beat Steeve Guenot of France, the defending champion, in the semifinals. He suffered the injury to his right eye during his quarterfinal bout against Edgaras Venckaitis of Lithuania.