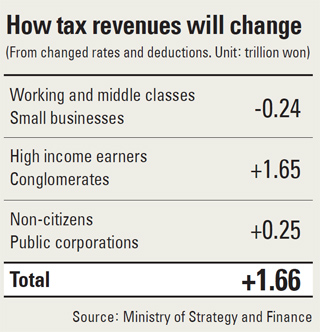 The Ministry of Strategy and Finance yesterday disclosed new tax rates that will raise an additional 1.66 trillion won ($1.47 billion) in tax revenue over the next five years, raising taxes slightly on conglomerates and reducing some deductions for high income earners.

But it admitted the 17 changes were more fine-tuning than major alterations in policy.

Finance Minister Bahk Jae-wan said it was difficult to make drastic changes with only five months left in the government’s term.

“At this last round of tax reformation under the incumbent government, the government tried to keep its basic direction toward tax reduction, but fine-tuned some vulnerabilities in the current policy,” said Bahk at a press conference yesterday.

The income tax rates for average incomes were unchanged. Bahk said he thought that would be a move in the wrong direction with the presidential election approaching. The ruling Saenuri Party will independently come up with its own tax proposals next month.

“It was difficult to make a long-term change that will affect the next government,” Bahk said.

Well-paid people, who earn more than 880 million won a year, still need to pay income taxes at rates between 24 and 38 percent.

The minimum corporate tax rate for conglomerates with more than 100 billion won in assets will inch up from the current 14 percent to 15 percent.

The ministry said there are 21 conglomerates subject to the raise, which will earn as much as 100 billion won in tax revenue.

Baek Un-chan, director of the ministry’s tax policy department, said 99.8 percent of the new revenue will come from reduced deductions from high income earners and the higher tax rates on conglomerates. According to the government’s calculations, revenue from the middle class and small and medium-sized businesses will decrease 14.5 percent.

Bahk said that the hike in taxes on conglomerates was not a populist move to “tax the rich.” The government still believes in its previous goals of boosting the economy and enhancing its own fiscal soundness, he said.

“The government is going against the tide, when other countries tend to cut corporate tax rates in order to support growth,” said Yoo Han-ik at the Federation of Korean Industries.

Taxes for smaller businesses will go down a bit. Start-ups and small enterprises will pay 50 percent less in corporate tax for their first five years in existence, compared to the current rules, which only extend for four years.

Individuals who make angel investments in start-ups will get a 30 percent deduction in income tax, up from the current 20 percent.

In order to boost the stagnant real estate market, the government decided to reduce taxes on the profit from selling a house or apartment for owners of multiple properties.

To deflate a real estate bubble, the Roh Moo-hyun government imposed a 50 percent tax on real estate profits for people who owned two properties, and 60 percent for those who owned more than two. The new tax rate will be 36 percent.

To ease the household debt problem, the ministry decided to increase tax deductions for consumers who use cash or debit cards to pay bills. It will decrease deductions for people who use credit cards. For years, Korea has encouraged use of credit and debit cards to cut down on the “black” or unrecorded economy.

Luxury handbags imported for more than 2 million won per piece will be taxed 20 percent on the retail price.