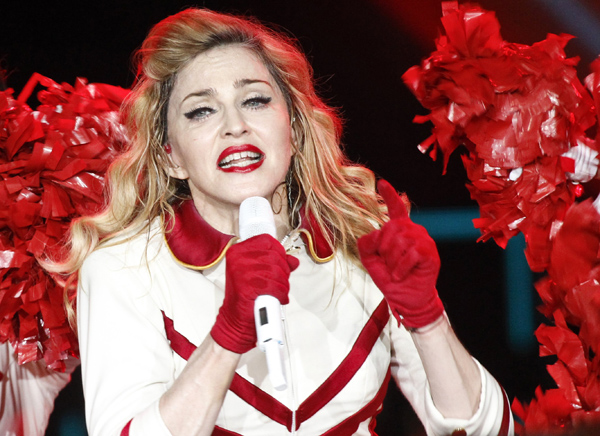 MOSCOW - Pop singer Madonna donned the trademark balaclava worn by punk band Pussy Riot during a concert in Moscow to demand Russia free three group members on trial for bursting into a Russian Orthodox church and singing a protest against Vladimir Putin.

The U.S. singer also stripped to a black bra to show the band’s name written on her back in support of Pussy Riot’s protest in Moscow’s main cathedral against close links between the president and the clergy.

“I know there are many sides to every story, and I mean no disrespect to the church or the government, but I think that these three girls - Masha, Katya, Nadya - I think that they have done something courageous,” Madonna said to loud cheers from the crowd at Moscow’s Olympiysky Stadium on Tuesday night.

“I pray for their freedom,” she said.

Maria Alyokhina, 24, Nadezhda Tolokonnikova, 22, and Yekaterina Samutsevich, 29, could face up to three years in jail for storming the altar of Christ the Savior Cathedral on Feb. 21 and belting out a “punk prayer” calling on the Virgin Mary to rid Russia of Putin, who has been in power since 2000.

The group members hid their identity by wearing colored balaclavas during protests. Madonna put on a black balaclava at one point during the concert as a show of support.

Echoing comments she made in an interview with Reuters before the concert, she made clear she believed the women had already “paid the price” after spending five months in custody since their arrest. “I know that everyone in this auditorium, if you are here as my fan, feels they have the right to be free,” she said.

The singer, songwriter, entrepreneur and actor, who has often courted controversy during her career and sang songs including “Like a Prayer” and “Like a Virgin,” joined other international performers such as Sting, Red Hot Chili Peppers, Faith No More and Franz Ferdinand by commenting on the trial. Reuters