Cofix rates may soon be used to buttress CDs

Cofix rates may soon be used to buttress CDs 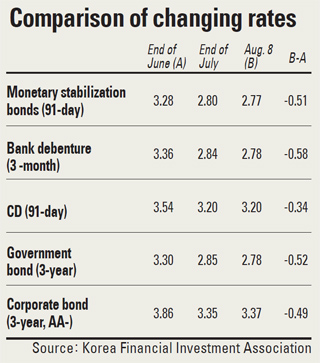 Kwon, a 37-year old woman who took out a mortgage linked to certificate of deposit (CD) rates, was puzzled recently when she checked the latest interest rate in her bank book.

Although the Bank of Korea recently cut the key interest rate, and CD rates have fallen since local banks came under attack by the Fair Trade Commission for allegedly fixing rates, Kwon has seen barely any change to the interest rate she must pay on her loan.

“The rate fell a mere 0.3 percentage point in July,” Kwon said. “I can’t help feeling that I made the wrong choice because I know other rates have dropped significantly.”

Industry sources said the CD rates eventually dropped after the rate-fixing allegations emerged last month, but that its fall has not kept pace with other interest rates.

According to the Korea Financial Investment Association, the 91-day rate for CDs edged down to 3.2 percent yesterday from 3.54 percent at the end of June.

Over the same period, the 91-day rate for monetary stabilization bonds dipped to 2.77 percent from 3.36 percent.

Given that three-month bank debentures slipped 0.58 percentage point to 2.78 percent, CDs are still behind the downward-sloping curve.

“This means borrowers who took out money from banks with CD rates aren’t benefiting from the BOK’s key rate cuts,” said a banker surnamed Kim.

The financial regulator is now considering adopting a three-month Cost of Funds Index (Cofix) as a new key money market rate to replace the CD rates.

At present, Cofix rates are calculated by averaging the interest rates of bank debentures, CDs, fixed deposits and installment savings by nine major lenders. But sources have suggested the three-month Cofix could be better calculated by averaging short-term rates, including fixed deposits of less than three months, the 91-day rate for CDs, and the 91-day rate for repurchasing agreements.

On July 28, Financial Services Commission Chairman Kim Seok-dong said he was looking into hammering out a short-term Cofix to replace CD rates.

One official from the regulatory body said the birth of a short-term Cofix would not make the CD rate obsolete. “Thousands of trillions of won worth of derivatives are still linked to CD rates, so we wouldn’t just abolish these and replace them with Cofix rates,” he said. “We will first prioritize applying Cofix rates to corporate lending and credit loans in order to minimize the burden on customers who are fretting about high interest rates amid a sluggish economy.”