Greens go through the roof as sun spoils crops

Greens go through the roof as sun spoils crops 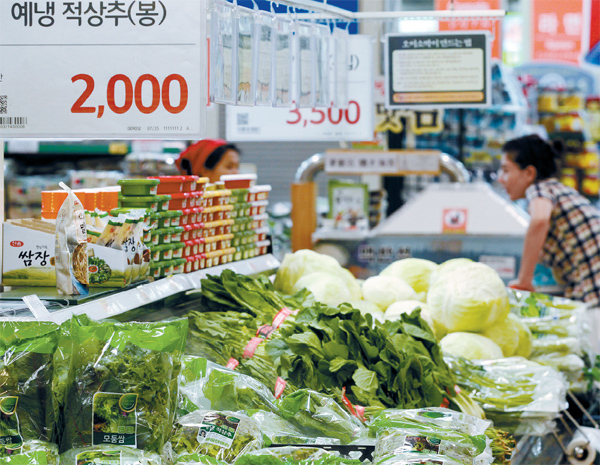 A signboard shows how the price of lettuce has doubled to 2,000 won (1.77dollars) per 150 grams at a large discount chain store in Seoul yesterday. According to the retail industry, the price of leafy green vegetables such as lettuce, spinach and green onions jumped on-month due to the unusual heat wave that has resulted in weaker crops. [YONHAP]


The ongoing heat wave has triggered a disastrous slump in vegetable crops, threatening shortages and higher prices. The prices of lettuce, spinach and some other green vegetables had almost doubled as of yesterday from last month, according to the retail industry.

The price of spinach at the market is 41.9 percent higher than this time last year, when heavy rain had an even more disastrous impact on vegetable crops.

Lotte Mart doubled the price of 150 grams of lettuce to 2,000 won, and is asking consumers to fork out an extra 68.9 percent on radishes.

Industry officials said the supply of vegetables usually peaks in the summer, but the extraordinary weather conditions have had a catastrophic effect on leafy vegetable crops, which are especially vulnerable to the heat. They often wither at temperatures in excess of 35 degrees Celsius (95 degrees Fahrenheit).

“As crops continue to be hit by the hot weather, shipments of produce are expected to decline further this month,” said an employee at E-Mart.

Pumpkins and cucumbers are also seeing a supply dearth.

“The prices of fruits and vegetables are highly likely to keep rising,” said an employee at Lotte Mart.