Kakao sees pots of gold at end of rainbow

Kakao sees pots of gold at end of rainbow 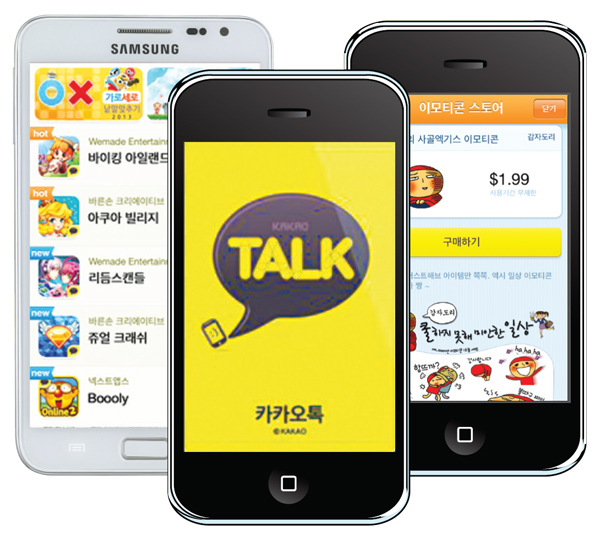 Although KakaoTalk has emerged as Korea’s most popular mobile instant messenger, it has constantly been dogged by criticism that it lacks a reliable profit model.

The messenger service, now available on Android, iOS and BlackBerry smartphone platforms, can be downloaded for free. It has helped those smartphone users slash their monthly telecom bills by providing free mobile messages. Since June, it has been offering free phone calls dubbed mVoIP, or mobile Voice over Internet Protocol.

But while neither of these services is returning solid revenue, the question of the company’s sustainability may yet be answered by a recent series of launches that could see the 29-month-old start-up begin to make some serious money.

The first derives from purchasable animated emoticons. At the Emoticon Store on the KakaoTalk menu, users may pay between $1.99 and $2.99 to download over a dozen emoticons - including highly popular characters such as SpongeBob and others from Disney and Sanrio.

The service has been available since November, but demand exploded from July 17 when KakaoTalk, which has nearly 50 million users worldwide, including 35 million in Korea, allowed iPhone users to upgrade their software and add scores of new emoticons.

The next day, KakaoTalk climbed almost 40 places to claim the No. 1 spot in the Top Grossing section of the Top 25 apps available on Apple’s App Store in Korea. It remained there for several weeks but has since dropped to third place. However, as a result, the messenger service has been posting average daily revenue of over 100 million won ($88,680), 40 times more than a month earlier, according to a spokeswoman with Kakao, developer and operator of the messenger.

Although there are four Android users for every iOS subscriber in Korea, such a meteoric rise in emoticon sales from iPhone users “originates from the fact that iPhone users have this tendency to try new, trendy products, since a larger portion of them are early adopters, especially compared to Android users,” said the spokeswoman.

A more strategic business model that Kakao hopes to turn into a lucrative cash cow came to the fore on Monday last week as it launched a platform for mobile game downloads called Game Center. Games bring in ready cash as many users are lured into paying up front for game items to either speed up their progress or to strengthen their characters. At Facebook, 12 percent of its revenue originates from so-called social games.


The Game Center currently accommodates 10 games from the Kosdaq-listed WeMade Entertainment, one of the key capital investors of Kakao, and Barunson Entertainment, both game developers. The games are only compatible with Android smartphones, but Kakao has not confirmed when it will release iOS versions.

A week into the service, Kakao, which is normally outspoken about its achievements, has yet to disclose the number of downloaded games from the Game Center. Industry insiders estimate the figure at around 100,000.

That compares to 2 million downloads in just one day after Line, the country’s second-most popular mobile messenger run by NHN, introduced its free smartphone game Line Birzzle on July 4. Within one week, it posted 5 million downloads. Line boasts 45 million users around the world, and about 90 percent of these come from outside Korea, with especially dense concentrations in Japan and Southeast Asian countries.

The Game Center, which Kakao first mentioned in March, had been highly anticipated by the media and IT industry insiders as a way of helping Kakao finally take off as a profitable company.

Previously, KakaoTalk’s sole weapon was its large pool of users - more than the Korean population of 48 million - that could potentially become clients for any service it chose to launch in the future. Given that potential, Kakao has been able to attract more than 100 billion won in capital investment from various enterprises and individuals since January 2010.

Devoid of profit-making businesses, however, Kakao has been posting losses year after year. In 2011, its net loss, mostly stemming from the cost of managing its servers, amounted to 15.3 billion won while revenue totaled 1.8 billion.

The company hopes to begin a turnaround this year for the first time on the back of the Game Center, according to Lee Je-bum, one of two co-CEOs of Kakao. He said the company plans to unveil a slew of profit models, including the tentatively named “Kakao Slide,” a kind of marketplace where users will be able to buy and sell digital content such as e-books. Kakao’s already released profit-attracting services are just the tip of the iceberg of what it has in the pipeline, Lee added.

Although it is too early to judge the Game Center as a success or failure, experts stress the importance of the content it provides.

“The key to the success of the mobile game business lies not in the platform but in their quality,” said Choi Chan-seok, an analyst with KTB Investment & Securities.