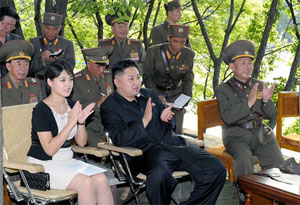 The North’s official Korean Central News Agency (KCNA) reported on Tuesday that Kim made the so-called “field-guidance” trip to a military unit under the 552nd Corps and watched a performance by female soldiers there.

“The spirit of soldiers is excellent,” he said at the undated visit, the agency reported. “There’s no space for unnecessary thoughts to infiltrate their mind. That’s the reason why the military-first culture is a good thing.”

In fact, it’s been more than two months since he made his last visit to an army unit in late May.

When the regime marked the anniversary of the cease-fire agreement made after the 1950-53 Korean War on July 27, Kim met with an old wartime soldier who fought for the communist regime, without visiting any army units.

A concert for the anniversary was also performed by musicians of the ruling party, not of the military.

His sparse visit to the Army stirred speculation that he might be backpedaling on the “military-first” policies instituted by his late father and granting the cabinet more power instead. That analysis became more reliable after top military brass Ri Yong-ho suddenly resigned in mid-July.

In this context, many Southern government officials and analysts are focusing on his visit to the unit and praise for the military. However, some told the JoongAng Ilbo that he seems to simply be consoling the Army, which is losing power under his rule.

Other analysts say that Kim could be conscious about the upcoming South Korea-U.S. joint military drill scheduled for Aug. 20.

The 12-day-long, computer-aided exercises will mobilize some 56,000 South Korean troops and about 30,000 U.S. soldiers with observers coming from seven United Nations member states. On Monday, Pyongyang denounced the drill, saying they will “use force against force.”

His wife Ri Sol-ju also accompanied him on his visit. Since her first public appearance at the Disney-featured concert on July 6 in Pyongyang, she has appeared in public seven times, but it was her first broadcast visit to the military by the state media. Footage from the KCNA also showed the couple watching the military’s performance at the base.

The state media also released undated photos of the couple visiting a farm in Ungok District in southern Pyongang.