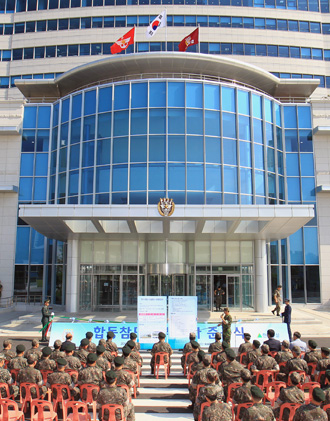 The Joint Chiefs of Staff yesterday moved into a new building located next to the Ministry of National Defense’s headquarters in Yongsan District, central Seoul. [YONHAP]

After two and a half years of construction, the Joint Chiefs of Staff yesterday moved into its new building located next to the Ministry of National Defense’s headquarters in Yongsan District, central Seoul.

The completion ceremony of the building was held yesterday with Gen. Jung Seung-jo, chairman of the JCS, and other commanders in attendance.

“We will now command various military exercises for the Army, Navy, and Air Force as well as overseas troops at our new building,” said an official from the JCS.

“The building will play a central role in commanding Korea-United States joint military operations after Korea retakes wartime operational control of its troops in 2015.”

Korea handed control to the U.S. shortly after the start of the Korean War (1950-53), which ended in a ceasefire. Currently, around 28,500 American troops are stationed in South Korea.

According to the JCS, the 10-story building, with four underground floors, is equipped with a defense system that can withstand electromagnetic pulse attacks, a large blast of electromagnetic radiation caused by a nuclear warhead and an earthquake of a magnitude up to 8.38.

The building is also equipped with the Combined Enterprise Regional Information Exchange System - Korea, a system used to share military information between Korea and the U.S., and the Korea Joint Command & Control System, the JCS said in its release.

The JCS previously shared the Defense Ministry’s building since its foundation in 1948. This is the first time that the JCS will have its own building.